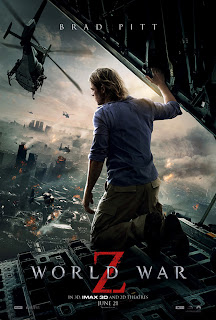 A Zombie Thrill Ride on a Grand Scale


One of the biggest differences that separates this movie from other zombie movies is the goal. In other zombie movies, the people just try to get away, but in World War Z, Brad Pitt's character wants to find a solution. He's a former UN employee, and in order to keep his family safe, he's sent on a mission to track down the origin of the disease, which provides more meat for the plot.

(I haven't read the book yet. I'm still trudging through Game of Thrones- which is very good but also takes a long time to read.) I read this movie doesn't strictly adhere to the book, but I can't tell you where it digresses.

The action, tension, and excitement is excellent. There were a few really frightening scenes which made me cringe or jump- all the more fun for a zombie movie- right? It was nice to see Brad Pitt making pancakes for his family, and I wondered if that's what he ends up doing a lot now in real life. All of the scenes with his family in the movie had heart to them.

Why Jack from LOST (Matthew Fox) had a small part as a helicopter pilot, I have no idea.  I kept thinking his character would come back to do wonderful things and he never got a chance. Strange, indeed. I would have liked to have seen more of him in this movie.

The final conclusion is a more quiet one, making the heady action scenes from the beginning and middle seem a little unbalanced. But it's nice to have a movie that doesn't adhere to the "Big Battle at the End" sequence. It's more like a reveal.

In conclusion, this book is on my TBR list. I'm going to have to read it and compare it to the movie, and then I'll have yet another review for you!

They actually re-shot the ending. Apparently, there was a different ending and now I really want to see it. *laughs*

I'm curious about this one, but it's sort of weird to me that Brad Pitt is in a film like this. Enjoy Game of Thrones. Awesome series.

Thanks for the review - this one's on my "maybe" list, but it does sound intriguing.

The book is supposed to be the opposite: much more creepy suspense, much less action.

Wonderful! Thanks for the review. I cannot wait to see this movie of Brad Pitt. And of course, I also have to get hold of the book. Whatever comes first, this is definitely fun. Should there be any differences, we will all find out. Thanks for making this chance to have a glimpse of the movie and it excited me more.