Star Trek Into Darkness: My Review 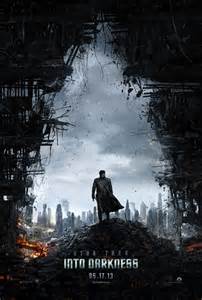 Visually Stunning and Rich with Star Trek Mythology
The opening sequence in this movie reminded me so much of the hammy action sequences original television shows. Yet, there was more to it- something in the eyes of the aboriginal people- that shot straight to my heart. Kirk has broken the rules to save them, and it makes me like him all that much more.

Adherence to the Prime Directive, weighing the needs of few against many, and finding peaceful alternatives to violence are all themes that resonate with the Star Trek mythos, and Into Darkness covers them all thoroughly. Converting the exploratory vessels into military weapons was an idea covered by The Next Generation in Yesterday's Enterprise, where the crew of the Enterprise encounter a time rift, allowing them to experience an alternate time line in which peace with the Klingons was never achieved. This movie plays off that theme, and brings in some older ones from the original series- which I can't mention because of spoilers. It is so satisfying to me- a fan who wants to see the heart of "Star Trek" and not some new re-imagined universe. If your looking for material that "goes where no one has gone before," then you're out of luck with this franchise. 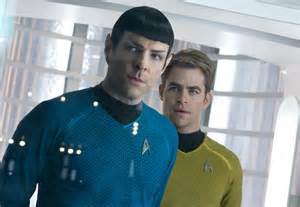 This movie doesn't have much in terms of romance- instead it develops the friendship between Spock and Kirk- something the last movie tore apart with the alternate time line. I found this story thread incredibly satisfying and touching. J.J. Abrahms knows when to slow down the action and take time in the moment and he does this with expertise in a scene between Kirk and Spock toward the end. 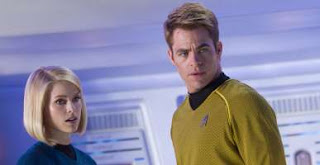 There is very little chemistry between Kirk and his new love interest. I wasn't sure it it was because she didn't have enough screen time with him, or if they are waiting for the next movie, but I'd love to see how this relationship develops- or if it does in this alternate universe. 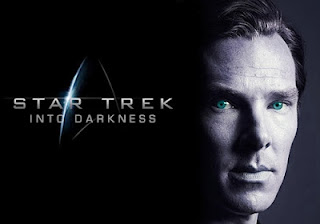 Finally, the villain that won't be named.

He was icy cold, sleek, mysterious and had a voice that haunted dreams. He was deadly and ruthless, but also had me wanting to believe there was good somewhere in there. Benedict Cumberbatch took the acting to a new level with this movie. If Into Darkness has one star that shines brighter than all the rest- that that is him.

Thanks so much for this review, Aubrie. I'm a fan of the earlier series, and 'spinoffs' but not so much the more recent series, which seemed to lose something of the original premise.

I wasn't too sure what to make of this one, or even whether it was worth seeing, but your review has certainly given me the impression that it is.

Looking forward to seeing it now!

Can't wait to see this! The last one was really good. Probably going to be a while though. Not even sure when it's coming out here in Australia, much less to DVD, which is what I'm waiting for.