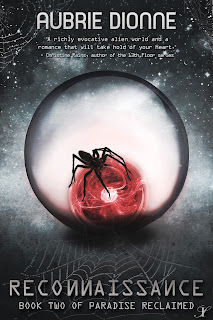 I'm going to share with you one of my favorite scenes today from my latest release. This takes place towards the beginning when they start their Reconnaissance mission. Enjoy! (And if you like it, try the entire book).

Pushing the doubt aside, I watched the ground recede, and the jungle rushed around us. We grazed the tops of the trees and the alien ship came into view like a giant, evil eye staring us down. Under the glass sight panel I squirmed as if I were naked and exposed.

I tightened my grip on my armrests. “If the laser beams turns on us…”

“I’ve got it. Evasive maneuvers.” Sirius grinned like he was playing a video game, but this was all too real. He hadn’t seen what the laser beam had done to the jungle.

As we approached the alien ship, the hull stretched beyond the frame of the entire sight panel, so we could only see parts of it at a time. The sheer size overwhelmed me, making our scout ship seem like a fly.

“Don’t get too close. We don’t want them to think we’re attacking.”

Sirius slowed, and the corsair hovered twenty meters from the hull. “Keeping my distance.”

The impenetrable shield of metal stared back at us, giving nothing away. A queasy feeling sickened my stomach, and I forced it down. “Let’s get Gavin in here.”

Sirius clicked on the intercom. “We’re in hovering mode. You can take off those pesky seatbelts. Gavin, your expertise is needed in the cockpit.”

I squinted, trying to decipher their satellite receptors. Nothing about the alien ship made sense. “Can you focus the telescope on the spires at the bottom?”

Sirius pressed the panel, and a screen came up, showing a lower viewpoint from the bottom of our ship. “Sure thing.”

He focused on the closest spire. “Whoa! Look at that. The metal is seamless.” Sirius pointed to the blinking red light at the tip. “It looks like the light sprouted organically from the spire.”

My stomach twisted in a knot. “Get closer. See if you can find any sight panels or any clues as to what those spires do besides the laser beam.”

The doors parted behind us with a swoosh of air, and Gavin came in, eagerness in his eyes. “Reporting.”

“Good.” I gestured for him to join us at the helm. “Look for markings of any kind.” I glanced back to Sirius. “Broadcast the prerecorded message.”

“Will do.” He pressed a button, and I heard the peaceful greeting the commander had composed in all of the languages of the known world. The words lilted in French, spun in Spanish, and cut jagged chunks in German. I leaned over to Gavin, “What’s it saying?”

He shrugged. “We come in peace?”

He crossed his arms. “I know enough. It’s not like I’ve spoken these dead languages to anyone. How am I supposed to know for certain I got the pronunciation right?”

I shook my head and sighed. Muscles bunching under his uniform, Gavin seemed like he used the workout deck more than Old Earth’s archives. These were the best people Andromeda could come up with? I stifled my growing frustration. This is what happened when you let a species integration assistant make important decisions.

Although she did choose me.

Another giant chunk of crystal floated up into the belly of the ship. That could have enhanced our soil for the next six months. It was painful to sit and watch our resources being stripped away after we’d traveled for generations and sacrificed so many freedoms to find this planet.
Like the freedom to choose your job, your spouse.

Would I have chosen Sirius? Glancing over at the perfect ridge of his nose, and the way his arms and chest curved underneath his uniform, I almost thought I would have, but I’d rather have no one than someone who didn’t love me back. So no, I wouldn’t have chosen him. Never in a million years would I pick Gavin with his arrogant cockiness, or Alcor with his gangly nervousness, either. I wouldn’t have chosen anyone.

My gaze glued to the sight panel as the metal hull parted before us, revealing the dark interior of a gigantic loading bay with strange stalactites. They hung from the ceiling like sharp teeth.

Sirius leaned forward. “Is this an invitation?”

“I hope so.” Gavin stepped forward. “I want to see what they look like.”

“Hold your place.” I straightened, trying to not let fear strangle me. “Keep broadcasting the message of peace.”

Bright light shot from the hole in the ship, and I cried out, raising my arm to shield my face, despite my aviator glasses.

Laser beam. “Move the ship! Get out of here!”

“I can’t.” Sirius’s face turned red, his jaw tightening, as he pulled on the controls. “It won’t budge.”

Gavin braced himself against the dashboard.

Alcor screamed from the back of the ship. “We’re all gonna die!”

“We’re not going to die!” I shouted and put my hands over Sirius’, helping him pull. “We’ve got to get out of the beam.”

This isn’t happening. It can’t be. It was too much like my dream. Maybe if I hit my head, I’d wake up. “We’d better do something, or we’ll have a very bad case of sunburn.”

My hands grew sweaty over his, but I held on, my heartbeat pulsing in every vein.

Can't wait to read it. I'd already downloaded it before I read this, but I need to finish my current book first! So many new releases this month!