Update on my Barnes and Noble Signing 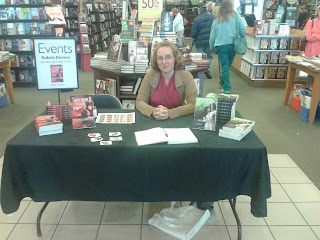 Here's the picture from the signing yesterday! (Taken by my dad- so sweet of him to come.)

So yesterday went better than the previous signing. I sold some books, gave out some stickers, and even got a few new subscribers to my mailing list. I also gave away four of the prequel books as a prize to get people interested in the series.

Having things to give away was helpful. That way, if someone looks then starts to walk away without buying, at least they can take something home with them. I also had people asking about my other books that weren't on the table, so having the stickers for all my books really worked well. I just gave them a sticker with the cover picture and told them they could look it up.

I got to meet another NH author- someone who was signing before me- and talk about what we do for promo. He had bookmarks and he stood by them, saying he got more sales from the bookmarks than anything else. He wrote true crime novels with his wife- so it was neat to talk to someone who wrote in a totally different genre.

The traffic in the store was still pretty slow. I'm not sure if it was because of the weather- it was a very nice day- or the season. (Seems like people buy more before Christmas). My next signing (still in the planning stages) will be in October, so that may be a better time to sell.The important thing is that I did it and it went better than the last one.

How about you? Would you talk to or buy a book from an author singing books at Barnes and Noble? what would get you to come over to their table?
Posted by Aubrie at 4:51 PM

I'm glad your signing went better than the last :) The stickers sound like a really good idea. I'll have to remember that if I ever have a signing LOL

I know I'll need to do bookstore events but I'm terrified of just sitting there...Glad yours went well!

...it's not often spoken of, those hidden fears associated with doing book signings. I was so worked up for my first one, the first few signings resembled the scribblings of a nervous drunkard ;)

So glad yours went well!

You're very brave! One of the things I love about writing ebooks is that I'll never have to do a book signing! I don't think they're big in Australia anyway.

What would get me to go to a book signing as a reader? Not sure. I'd like to say that I'd go up to an author who's books I new to say hello, but the truth is I'd probably be too shy!

I'm glad this signing went better. I've heard that reading work even better than signings, but I've tried neither so far.

I have to admit I didn't go up to the author when I was at B&N one time and there was a signing. I kept thinking about stopping by and saying hi, but his book wasn't one I was going to buy, so I just ended up passing by. I still feel guilty about it.

Hmm, good job!
I like your post,visit my homepage here: