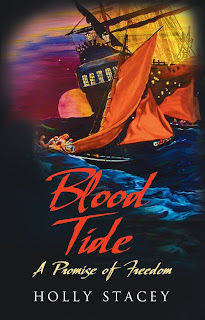 When I started writing Blood Tide, I was inspired by two things – the need for a warm climate and the portrait of an unknown beauty in a head wrap that still hangs in my late grandmother’s house.  The portrait is so striking – the charcoal sketch of what seems to be a Caribbean woman.  There is not much to look out outside of her head and wrap, but it’s so intoxicating, I could always envision her walking to an outdoor market on a blisteringly hot day to buy spices and fruit.  It was the seeds of Amber and her story of slavery and piracy.
In the book, Amber’s passage to the New World was not at all like an average slave’s crossing, but it was very common for the women and children to be separated from the adult men. Many female slaves were allowed to work the ship as servants and ‘maids’ until they reached their destination. Being the only woman, Amber shares a cabin with the cabin boy because he’s deemed still a child and women and children were often clumped together.
Slaves that came to plantation were often from different parts of Africa, with different language, religion and customs.  Although it’s not stated here, Amber’s mother and E (the strong slave who inspires the others to freedom) were both originally from the same tribe.  Also, religion on plantation often became a mishmash of different religions, with heavy practice of Voodoo, such as found in Haiti.  Much of Precious’s (Amber’s mother) practice is taken from Metraux’s study of the Voodoo religion in Haiti, where Voodoo and Christianity are practiced hand in hand.  The fire dance and the magic initiation for Amber are both fiction, but I feel represent the nature of the island’s religion.
In record, there is only one successful slave mutiny aboard a crossing, and that was the Amistat. Recorded as losses in stock, not much is said about what happened to the slaves after the revolt. I found in my research that most of the history we know is written with the slaves’ account in the Caribbean only by an ancestor of the slave and therefore, slightly romanticised. Similarly, history written by those working the slave trade keep their histories frustratingly narrow-minded: slaves were not seen as people but as cattle, and therefore their lifestyle and experiences were overlooked.

Amber, a mulatto slave in the Caribbean, is turning some heads with her beauty. Her mother is a healer of the old ways and tries her hardest to protect her daughter from the roaming hands of the plantation master’s son. When a new shipment of slaves brings illness and unrest, Amber’s mother is accused of witchcraft by the master’s son after the master dies of a heart attack the night of the magical ‘fire dance’ performed by the slaves to welcome the newcomers.

But that’s just the beginning of Amber’s troubles. With the murder of her mother shortly after, she is sold to a new owner and shipped to the Americas along with all the other ‘problem slaves’. Amber never makes it to her destination as the ship’s cook inspires the slaves to take over the ship and turn pirate. Amber must learn to live like a refugee, literally fighting for survival. But has she found true freedom and if so, at what cost?

Set in 1733, Blood Tide tells a tale of love, betrayal, magic and the immense task of finding one’s place in an impossible world. 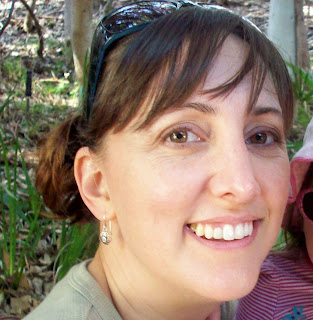 Holly Stacey started life as an archaeologist and folklorist but always had a love of writing.  Since moving to Essex, UK, her writing has been included in anthologies by Pill Hill Press, Bridge House, Rebel Books, Knowonder! and her own small publishing house, Wyvern Publications.

She has a Masters Degree in Early Medieval Archaeology from the University of York and a Bachelors Degree in Cultural Anthropology and Archaeology from UCSB. She has excavated in three nations on Roman, Native American, Victorian, Anglo Saxon, Viking, and Pictish digs, all of which inspire her writing.

Holly infuses her work with history and folklore, having a special love of dark tales with pirates, magic, and a bit of gold. Her award winning teen novel, The Faerie Conspiracies is available to buy from Amazon and her historical fiction, Blood Tide: A Promise of Freedom is now on kindle.

Now a staff writer for the online literacy website for children, www.knowonder.com she is also working on a non-fiction book for the new press Springbok Publications. When not writing Holly spends most of her free time reading traditional fairy tales, creating jewellery for Seadrake Creations (www.seadrakecreations.co.uk) and spending time with her family. You can read more about Holly on her blog page: http://inkydoom.blogspot.com/