Interview and Giveaway with Stephanie Monahan, author of 33 Valentines 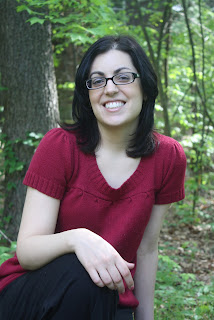 Today I have the lovely Stephanie with me for an insightful interview. She has offered to give away one ebook of her latest release to a commenter. So, please don't forget to leave your comment with your email below!

1. Congrats on the release of your debut novel with Entangled Publishing! Please tell us what it was like to learn of your contract.

Thank you! When I was offered a contract for 33 Valentines, I was pretty shocked! I’d been trying to sell a different book to agents for about a year, without much luck. 33 Valentines was written on a lark. It was originally a novella, only about 80 pages. I had submitted it for an anthology, so when my editor e-mailed me, saying he loved it and wanted me to expand it into a full-length novel, I was blown away. It certainly wasn’t something I ever expected.

2. Tell us about 33 Valentines and where you got the idea for it!

33 Valentines was written after I saw a call for submissions on the Entangled Publishing website. It was for their Valentine’s Day novella anthology. Soon Sophie, my main character, started talking to me. She’d just gotten out of the ER, but that was the least of her problems. She was in love with her best friend, Sam, and he was going out on a Valentine’s Date with a woman who seemed to be perfect for him. It was just another string of awful Valentine’s Days for her, but this time, she had everything to lose.

3. You have such a lovely cover. What did you think the first time you saw it?

Thank you! I was sitting in my cubicle at work when the email came. I think my exact thought was: oh my god, it is perfect! I definitely teared up a little bit. Good thing none of my co-workers chose that moment to try to talk to me.

Good question! This is Sophie’s 33rd Valentine’s Day, and maybe the most important one of her life. There are snippets of some of her past Valentine’s Days, including her 32nd.  (Spoiler alert – it doesn’t go well!)

5. Describe your main character. Is she anything like you?

I think the only thing Sophie and I have in common is that our first names start with the letter S. She can sing and play the piano, and I can do that only in my dreams. She’s a lot more guarded than I am, and has a hard time expressing her feelings. I find it very difficult not to let people know how I’m feeling! When the book begins, she isn’t close to her family—I talk to my parents almost every day. I guess one thing we have in common is our sarcastic sense of humor. She was a blast to write.

6. What are you working on now?

I am almost done with the first draft of my second book. It is about a former mean girl whose past comes back to haunt her in the form of a Top 40 hit. Some of the book is set in the 90s and I’m having an awesome time listening to my 90s playlist on my iPod as I’m writing. Toad the Wet Sprocket, Gin Blossoms, etc, are a big inspiration for this book.

7. Do you have any advice for writers who want to be published?

I would say, besides reading and writing, which are essential, is to be prepared to work hard. If you really want to be published, writing isn’t something you can do here and there. You have to dedicate a lot of time. You have to practice and delete and revise and rewrite. Nothing is ever complete the first time around. If you put in the work, you’ll get the results you want, eventually.

Thank you so much for having me on your blog!

Stephanie Monahan received her degree in English Literature and Rhetoric from Binghamton University. It was there, in her first Creative Writing workshop, that she fell in love not only with storytelling but also with the man she would go on to marry. In addition to reading and writing, she is passionate about the New York Giants, finding the perfect cup of chai tea, and her dog. She is a firm believer in the healing powers of a good night’s sleep and British pop music. Born and raised in upstate New York, Stephanie now lives in central Massachusetts with her husband.

Now for her New Release: 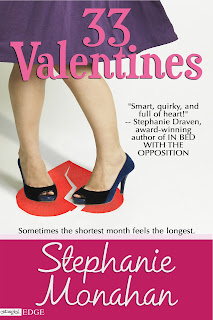 All Sophie wants for her thirty-third year is a calendar without a February--and without a Valentine's Day. The unlucky month haunts her with regrets, loss, and missteps she can never take back. But this year, she's determined to make a change-- and she's going to start with telling her best friend, Sam, how she feels about him.

But February isn't making it easy for her. Sam's got a date with his dream girl, and Sophie finds herself in the hospital. Then there's her father, who has a surprise that's about to turn her world upside-down, and her little brother, who doesn't seem to have any room for her in his life. While everyone else seems to be living life, Sophie is stuck in neutral.

Now, Sophie must come to terms with everything that's holding her back in order to fight for what she wants before she loses the chance to turn her luck around.

Please leave a comment with your email for a chance to win her latest release!
Or buy it now on Kindle.

Great interview. Like the name of the book and the story sounds interesting.

Wow, this sounds like a find myself novel. I love those.
debby236 at gmail dot com

Debby - that's exactly what I was going for :)