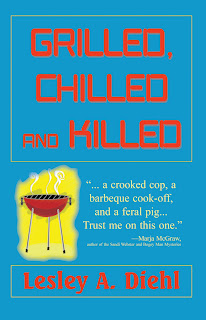 I'm so excited to introduce a fellow agency sister, Lesley Diehl! If you are just tuning in, Lesley and I have Dawn Dowdle as a literary agent. For her website click here.

Lesley has written a great guest post about one of her characters in her new book:

Oak Tree Press released the second book in my Big Lake Murder Mystery series, Grilled, Chilled and Killed.  Writers often have favorite characters in addition to their protagonists.  One of mine is bad boy cop Toby Sands who made his debut in the first book of the series, Dumpster Dying.  Today I want to introduce readers to a new character and one I hope they will come to like.  Her name is Daisy DuBignon St. Simonton.  She lives in Brunswick, Georgia.  With her husband Rodney she is responsible for priding Emily and her daughter Naomi with a place to stay when a tornado rips apart the tent they’ve set up for camping on Jekyll Island, just across the river from Brunswick.  The rescue comes with a downside, or course.  It means Emily can’t finish her shower with Detective Lewis, but that’s another part of the story.

Daisy, Rodney, Emily and Naomi meet while playing golf on Jekyll Island.  It’s an immediate friendship among the four, so much so that Emily recruits them to help her track down clues to a murder when they visit Florida.  Part of Emily’s instant attraction to Daisy is her height and her hair so like that of her friend and boss Clara.  And Emily does like big gals, probably because she’s so little.

Daisy has her own unusual background:

“You might say we were white trash, but Mama wanted me to be raised as a southern lady, go to the best schools, have my coming out party, meet all the right people, so she sent me to a women’s college in Milledgeville, Georgia—a finishing school  That had to cost her a bundle…  “
“The head mistress was a real pain. Rules, rules, rules, and she intended to enforce them. The curfew was nine o’clock on weekdays and eleven on weekends. I thought that was just stupid. When I was home, mama let me stay out on the weekends as long as she knew where I was. I was a wild one, true, but I was smart, too. At school I kept accruing late minutes by coming in after curfew. The punishment was spending an entire weekend in my room.”
“I’m certain you found a way around that.” Emily sped up and passed a Cadillac with two white-haired folks in it.
“It was a challenge. Whatever I did to get out of my room had to be clever enough that I wouldn’t be caught or eventually I’d be expelled. Mama’s money would be wasted.”
“What did you come up with?” Emily turned into the motel parking lot, eased Stan into one of the open slots and let Daisy continue the story.
“There were two women who were assigned the job of checking to make certain I was in my room. The monitor spies, we called them. I found out their weakness and simply bought them off.”
“With what?”
“Godiva chocolate. It took a good bit of my allowance, but it was worth it. Anytime I got stuck in my room and decided to sneak out, I could count on their ignoring my absence if I slipped them a box of chocolates. That took care of that, but how could I find a way to get around coming in late?  I knew if I did it many more times, the head mistress would finally recommend my expulsion.”
“Somehow I doubt your choice was to come in early.”
“Not me. I set up a committee. Anyone needing to stay out late on a weekend submitted their intentions to the Late Minutes Committee. Of course I was the head of it. Then we developed a plan for getting them back into the dormitory without being noticed or using up their allotted minutes. It took planning and forethought. No one could just pop in late and expect us to rescue them.”
“That was the smart part of your wildness, right?”

Emily concludes she has chosen the right woman to help her on her not-quite-legal sleuthing adventures.  Rodney, although in a wheelchair, is an excellent golfer, a pro at pool, and makes a good look-out for their nighttime capers.  Unfortunately, he’s bad at lying to Detective Lewis.

It’s a race between Detective Lewis and Emily to find the killer, but I think I’ve given Emily all the good deputies. 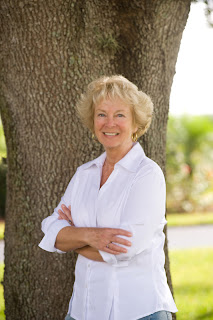 Lesley retired from her life as a professor of psychology and reclaimed her country roots by moving to a small cottage in the Butternut River Valley in upstate New York .  In the winter she migrates to old Florida —cowboys, scrub palmetto, and open fields of grazing cattle, a place where spurs still jingle in the post office, and gators make golf a contact sport.  Back north, the shy ghost inhabiting the cottage serves as her literary muse.  When not writing, she gardens, cooks and renovates the 1874 cottage with the help of her husband, two cats, and, of course, Fred the ghost, who gives artistic direction to their work.  She is author of several short stories and several mystery series: the microbrewing mystery series set in the Butternut Valley (A Deadly Draught and Poisoned Pairings) and a rural Florida series, Dumpster Dying and Grilled, Killed and Chilled (to be released late in 2012).  She recently signed a three-book deal with Camel Press for The Consignment Shop Murders including A Secondhand Murder.  For something more heavenly, try her mystery Angel Sleuth.  Several of her short stories have been published by Untreedreads including one (Murder with All the Trimmings) in the original Thanksgiving anthology The Killer Wore Cranberry and another (Mashed in the Potatoes) in the second anthology The Killer Wore Cranberry: A Second Helping.  She invites readers to visit her on her blog and website.

This is the second in the Big Lake Mysteries (the first was Dumpster Dying) featuring Emily Rhodes, retired preschool teacher and bartender turned amateur snoop.

Here's the blurb:
It seems as if Emily is destined to discover dead bodies.  This time she finds one of the contestants at the local barbeque cook-off dead and covered in barbeque sauce in a beer cooler.  She should be used to stumbling onto corpses by now and the question of who killed the guy should pique her curiosity, but Emily decides to let Detective Lewis handle this one, at least until she figures his theory of who did the deed is wrong, wrong, wrong.  Lewis’ denigration of Emily’s speculations is condescending enough to stimulate her dormant snooping skills.  As the two of them go on their separate paths to find the killer, Lewis’ old partner, Toby the dirty, tobacco-spitting cop interferes in the investigation leaving Lewis with the wrong man in jail. Killers, bootleggers, barbeque and feral pigs—it’s a lethal game of hide and seek in the Florida swamp.
Thank you, Lesley, for dropping by!

I just found out about you the other day and enjoyed reading the excerpts. Sounds great. Good luck on your sales.

I love stories about working around the system. I've made it my life's work!. Great post!
Wendy
W.S. Gager on Writing

It sounds fantastic! Good luck with the book.

Thanks for visiting the blog. I like characters who find their way around obstacles in unusual ways. I don't even mind if they skirt the law a bit. Emily and her friends do this a lot, much to the disdain of Detective Lewis.

I want to thank Aubrie for having me visit her blog. The authors at Blue Ridge Literary Agency are a great group of people, supportive and talented as is our agent Dawn Dowdle. What a wonderful organization!

Thanks for the excerpt for your new book, Leslie. I've barely begun Dumpster Dying but once I finish that, I'll get to your other work, for sure!