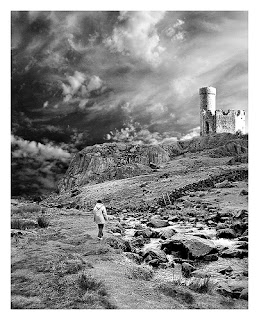 I started my writing journey way back in 2006 writing an epic fantasy tale called The Voices of Ire. Epic fantasy was what I read the most as a child, and I consider it to be my home genre, the place where I'm the most comfortable. I also LOVE everything about it. I'm a big fan of Lord of the Rings, and I grew up reading Tad William's Memory, Sorrow, and Thorn trilogy starting with the The Dragonbone Chair.

But, my first few fantasies didn't sell well, so I branched out and tried science fiction. I also grew up watching Star Wars and Star Trek TNG, so that was an unexplored area of my writing. I was afraid I wouldn't be able to do it, because I'd never been too interested in real science, but I wanted to give it a try. That's when my writing career really took off. I wrote a novella called Nebula's Music in 2009, which got picked up by Lyrical Press. (You can still buy it here for $1.99.)  Then, I started a full fledged space opera- The New Dawn series, and a YA tie in called the Paradise Reclaimed series.  My first book in the New Dawn series, Paradise 21, got me an agent, and then sold to Entangled Publishing, really launching my career. These books took up the next two years of my writing career from 2010-2012.

During my sci fi frenzy, I longed to go back to writing fantasy. So, I started Minstrel's Serenade on the side in March of 2011. The story sat and sat throughout 2011, and much of 2012 until I finished the New Dawn series, and two books in the Paradise Reclaimed series. Entangled Publishing had asked me if I could try a contemporary romance, so I wrote two of those just to be safe-one will be coming out in February 2013. Finally, after that, I could get back to finishing Minstrel's Serenade. I devoted November to writing it. And here I am today at 71k, ALMOST DONE!

I didn't realize just how long it took to write epic fantasy prose. The word building has to be phenomenal, and they have to speak like olden times, which takes SO much longer to write than any other genre, even sci fi.

I'm going to try to finish it in these last days of November and send it in to my agent to read!

Have you had a book on the back burner that you long to finish?

Aubrie - I have sooo many books on the back burner it isn't even funny. ;)

The one series which will be sitting the longest is the one I thought up first. A dark paranormal trilogy about Paladin Knights and Gargoyle's.

I'm basing the knight's off Charlemagne's Knights and need to do research but the biggest hurdle is the fact that for writing I'm moving from the paranormal genre to fantasy.

I've also got a loose paranormal series with three stories started, one I've even had content editing on, but I can't force myself to want to work on them. In my life right now, I need the feel of a fantasy to get into the story. So I'll be leaving them off to the side while I work on other things. I have more ideas than time right now.

LOL! How about all my novels being on the back burner. I'm great with first drafts, but I need to get better in actually finishing an edit of them. It's so much easier working on shorter works.

I'm excited that you're almost finished it. Your fantasy writing is beautiful. And yeah, I have like a dozen first drafts that are sitting on my hard drive that I've done nothing with. I need to get a house-elf that's also an editor. I'd be so productive that way!

I'm with Beth - too many books-in-progress to name! There's one the I'd really like to get back to. It's the first idea I had that could work as a full-fledged novel. Don't know that I'll stick with that original plotline, but the characters and certain scenes could definitely be used. I still love 'em!