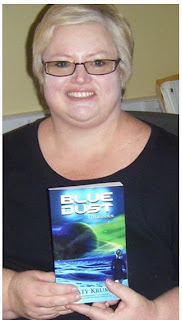 1. Your cover for Blue Dust Forbidden is absolutely gorgeous. Did you have a say in its design? What did you think when you first saw it?
Thanks. I had a lot of say in what I wanted. I sent my publisher some images and ideas and he created the cover. I love it and when I first saw it was quite emotional. Since then however, we’ve had a rethink and have designed a new cover where the girl on the front reflects Qea, the heroine, more accurately. This was decided after some market research and what readers thought.
2. Tell us about your new release!! What was your inspiration behind it?
Blue Dust : Forbidden is the first in the Blue Dust series. It was really born out of my own struggles as an ‘alien’. I emigrated to the UK from South Africa 12 years ago and found it all quite traumatic. I started a blog about living on a new planet as that’s what it felt like to me, and that morphed into Blue Dust. I’ve also always loved thrillers and once as a child came home from school to find the house deserted . They hadn’t been abducted by aliens although I kind of wished they had, instead they’d been shopping, which was far too boring and mundane for me. I never forgot that feeling though and would spend endless hours making up stories about what could have happened to a family that mysterious vanished. I took that thought and ran with it.
3. What drew you to write science fiction? Are you a big Star Wars or Star Trek fan? (I have to ask because I am!)
I have a bit of an overactive imagination (not always appreciated by my teachers) and sci fi gives me a way to reveal the pictures and places in my head. I love science fiction, but not incomprehensible sci fi. I love strong characters and a compelling story and delighted in the strange worlds that The Enterprise visited, even though they scared me silly. I also love humour in sci fi , like in Third Rock from the Sun and Alf, it’s the ‘alien trying to fit in’ that really intrigues me. I also love fantasy, weird is good. So really Blue Dust :Forbidden is a mash up of many genres – sci fi, fantasy, thriller and romance. Multi-genre, that’s what it is.
4. How did you find your publisher: Ghostly Publishing? What is it like working with them?
My previous book was sent out to many publishers, but with Blue Dust I was lucky enough to find Ghostly Publishing. I sent it to a couple of other publishers too and to be honest forgot about it, and began working on the next book. I’d made a mistake in my email address, so Neil had to do some online detective work and he hunted me down through my blog and also left a message on authonomy, which I didn’t see for weeks. I eventually got in touch with him and voila! It’s been great so far, especially as I know he loves the book. As an author himself Neil understands the whole business, which is fantastic. Of course nothing is ever as you imagine it. I was a complete numpty about the social media side of things so it’s been a sharp learning curve and I'm finding the social media thing very time consuming.
4. What's next on the writing front for you?
I’m working on the sequel, Destiny, which will be out next year, planning book 3 and am also percolating another entirely new series. And of course adapting my novel for film. I’ll also be working on a previous book that Neil’s keen to publish too. So it’s all go, go, go’. I’m constantly writing, and often work on more than one project at a time.
5. Where can we find you on the web?
www.katykrump.co.uk
www.ghostlypubishing.co.uk
http://britbokblog.blogspot.com/
Bio
I was born and raised in South Africa and was an English and music teacher before almost losing my sense of humour (and mind) and deciding I needed to devote myself to the thing I love most - writing. I published a number of children’s musicals and then became a full-time television scriptwriter for children, entered a nationwide scriptwriting competition and was selected to be on the writing team of a popular South African soap. I also worked as an advertising copywriter, wrote radio ads and jingles, educational textbooks and readers...anything writing-related to keep the wolf from the door. Basically, I’m constantly writing, books and TV or film scripts and if not that then plotting, planning and scheming how to take over the world!

Like my creation Qea, the feisty heroine in Blue Dust: Forbidden, I understand something about being an alien after I embarked on a new journey, crossing the galaxy to settle on a new planet (England) many moons ago. Some like to call this process 'immigration'. I am now the proud possessor of a maroon Intergalactic Wayfarer Permit and have come to love the aliens I mix with daily, even though they don’t always speak the same language.
And now for the fabulous cover of Blue Dust: 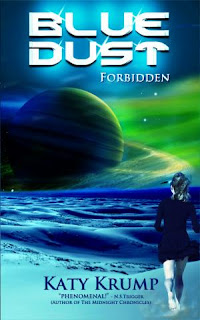 Hey there! Do you know if they make any plugins to help with SEO?
I'm trying to get my blog to rank for some targeted keywords but I'm not seeing very good results.
If you know of any please share. Cheers!
My website :: slow computer