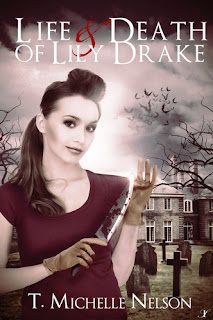 I'm so excited for this new release at Inkspell Publishing! Tomorrow, I'm having T. Michele Nelson over for an interview. Today, you get a glimpse of this fantastic new book:


"Fans of Charlaine Harris and TRUE BLOOD will find much to enjoy in Michelle Nelson's cracking, sanguine debut. Dark, funny, audacious and written with a confidence that belies this as her first effort, LIFE AND DEATH OF LILY DRAKE dispenses with the idea that vampires are pasty, maudlin, emo-types and restores them to all their brutal bloodthirsty glory. And in terms of heroines to root for, I daresay Lily Drake gives poor 'ol Sookie a run for her money."
- Kealan Patrick Burke, Bram Stoker Award-Winning author of THE TURTLE BOY and KIN.

For Lily Drake, slaying vampires is easy...
Dating them is the hard part.
Lily Drake is your everyday hard-working single mom…until a gorgeous vampire shows up on her front door who she mistakenly assumes is her blind date for the evening. As one crazy scenario after another unfolds, Lily finds herself falling in love with two vampires, slaying the evil ones, and being prophesied as the savior of the entire undead race.
Deciding between pizza and Chinese take-out will no longer be one of the hard decisions facing Lily Drake once she is immersed into vampire society. Humanity or immortality? That doesn't hold a candle against this question - which of the two handsome vampire cousins?

The Life and Death of Lily Drake is not your typical vampire love story. It’s a tale about the humorous mistakes a woman makes simply trying to survive not only life, but the dating scene.  How will Lily manage working full-time, taking care of her young son and fighting the undead at every turn?
Lily will have to figure it out, but who better to save the world than a mom?

Can't wait for tomorrow! Thank you for participating. Can't wait to return the favor for your incredible novel COLONIZATION!!!!

As a fan of True Blood, this one sounds like it may be right up my alley. Hot vampires!