Why Did Obi-Wan Sacrifice Himself to Darth Vadar? 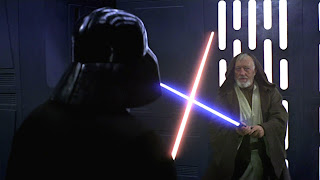 This is a question I've been pondering ever since I watched Star Wars as a kid. If Obi-Wan was so powerful, why couldn't he figure out a way to get past Vadar to the Millenium Falcon  and escape with Luke, Han, and Leia? The scene just seems too contrived, too preplanned on Obi-Wan's part. Take, for instance, the last time he sees Luke; when he says goodbye, it's a heartfelt, "May the force be with you." It's like he knows it's the last time they'll be together and he's saying goodbye for good.

I've come up with several reasons, and I'm not sure which one is entirely true, or if it's all of them combined.

#1. The most obvious reason: He needed to distract Vadar to allow the Millenium Falcon to escape. Even though they "let them" escape as Leia says after they're free, Obi-Wan may not have known that, and may have sacrificed himself in order for them to escape. Vadar does seem surprised, and takes time to kick his robe to see what happened, allowing them to get away.

#2. He says at one point that if he died, he'd become more powerful. So, by having Vadar kill him, he was actually making himself an even greater foe. Now he can advise Luke as a spirit guide through the force, saving him in the second movie when he gets attacked by the snow creature. If Obi-Wan had been alive, he wouldn't have been able to get to Luke in time to keep him awake during the snow storm.

#3. (I didn't come up with this one until after I watched the new movies and saw what happened between him and Anakin.) Obi-Wan blames himself for Anakin's failure as a Jedi and his turn to the dark side. Perhaps, by allowing Vadar to kill him, he's taking the punishment for not advising him well enough/looking out for him as a young man. Maybe he sees it as coming full circle?

#4. The script writers needed an event that would make Luke man-up so to speak and grow. So, it's a plot device. With Obi-Wan alive, Luke is still a boy following his trainer. But, left to his own devices, he has to grow up quickly and learn to use the force on his own. He was too whiny with Obi-Wan.

I us thought it was number two combined with a bit of number four. Although in reality I took it as because the creators figured Alec Guinness was a bit too old to do all the acrobatic Jedi stuff before the advent of CGI.

I always disliked that death scene because Obi-Wan quit fighting. It's one thing to die in battle, another to allow your death to happen.

I can only suppose he needed to die that way to become a ghost. But I don't like how it happened.

He obviously did it for Luke's benefit as he waited for Luke to be there before he gave up. I am pretty sure that he knew he couldn't beat Vader as he was well past his prime. The disappearing gets me though. Where did he go, what did he know about the force that let him cease existing.

Maybe he didn't sacrifice himself, maybe he had learned to teleport using the force and was trying to teleport onto the falcon but over shot and wound up in space or in a wall.