A Hero Rising is FREE for a limited time on Kobo! 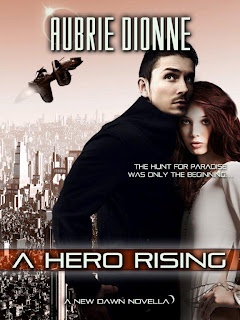 FREE on Kobo Books
After watching his love leave on a colony ship, James Wilfred must save those left behind from a planetary apocalypse. Their salvation lies in an unfinished ship tucked away in a secret government base, and only James can break in and pilot him and his people to freedom on a nearby space station.

As part of the promotion for the release of the last installment of the New Dawn series, Haven 6, Entangled Publishing is offering a Hero rising free for a limited time.

Let's get the rank up today! Please get the word out for me and download your copy!
Posted by Aubrie at 12:53 PM

That's awesome! I'll be sure to spread the word.