Pull of Gravity is Out! 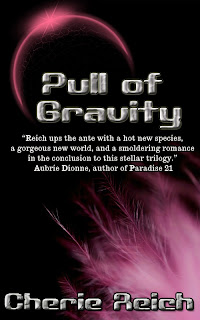 To add on Goodreads.

A no-nonsense Earthling corporal, Nike accepts a mission to destroy the winged-people of Cupidis to give her species a new home planet.

A spoiled Cupidian prince, Edonys gets whatever he wants until his dying father tells him he must choose a mate and take his rightful place as king.

Nike and her reconnaissance crew's space cruiser lands upon Cupidis, and they are taken to the royal palace. The king's decline leads her to believe Mission: Conquest will be easy. Edonys refuses his father's last request to fall in love, but Nike isn't anyone. She's bold and different than any Cupidian female. As Nike and Edonys's quests intertwine, an Earthling and a Cupidian will find it easier to ignore the pull of gravity than the pull of love.

Author Bio: Cherie Reich is a writer, freelance editor, book blogger, and library assistant. She enjoys writing horror, fantasy, and mysteries, but she doesn't let that stop her from trying other genres. Her short stories have appeared in magazines and anthologies, and her novelettes are published as e-books. She is a member of the Virginia Writers Club and Valley Writers and placed third in Roanoke Valley's BIG READ writing contest.


Congrats, Cherie, on the conclusion of your trilogy!
Posted by Aubrie at 8:24 AM

Thank you so much, Aubrie! I couldn't have done it without you. :)

It's the best book in the trilogy!