Musings from the Slushpile 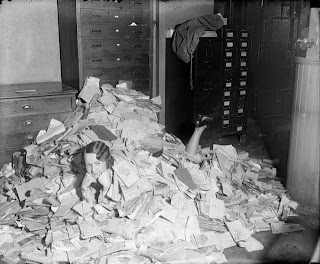 Okay, so I've dived into something completely different and knew: I'm now reading the queries that come into my agency for Dawn! Let me tell you, this has been an enormous learning experience, and also given me more of a push to work on my own writing. I thought I'd share with you from time to time what I've noticed and learned:

1. Many people write in omnipresent POV and don't know it. On the Blue Ridge Literary Agency website, it clearly states Dawn doesn't accept anything written in omnipresent POV. There's a reason for this: editors are not looking for it at this moment, especially YA which is written in first person quite a lot. The days of Tolkien writing long descriptions are over. If you don't know what omnipresent POV is, then look it up. If your characters are all thinking thoughts in the same chapter, that isn't good. If something happens, and they can't physically see it, but it happens anyway, that isn't good either.

2. I can't express how important it is to put your hook in the first page, preferably in the first few paragraphs, or even the first line. I read ten queries an hour, and still I'm not caught up, so if I'm into the third page, and I don't have a hook yet, I'll vote no. Description and setting is the worst thing to put first, unless that is your hook. (And it would have to be extraordinarily different than the norm for it to be a hook.) One of the queries was beautifully written and reminding me of Heart Of Darkness by Joesph Conrad, but all it did was set up the story for the first two pages. I had to say no.

3. 200 followers on Twitter is not a platform or a marketing plan. I have 3,500 and still I don't think I have enough to boast of in a query letter.

5. Read a lot of books in the genre which you want to sell. I've read perfectly good manuscripts that just don't sound like YA, chick lit, or middle grade to me. You have to read a bunch of things in the market right now, not ten years ago.

And that's it for now! I'll try to post this on a regular basis for those of you out there submitting queries!

Leave a comment with your email and I'll look at the first five commenters' queries!
Posted by Aubrie at 7:03 PM

I really like this, it's good stuff, this post really says what it means to authors looking for agents.

If you research the agents then you know your work is not for them. For example one agent says she hates damsel in distress then on her blog she ranted about how people who are looking for agents don't research the agents. Then there are some agents who may not represent the future genre you wish to write or who don't like multiple POVs. Your post really explains that an author needs to research.

For example when I was researching the age groups I wanted to write for. Studies showed middle school likes novels written in 3rd person, teens/YA like books written in 1st person because they can relate to the characters and feel their emotions more, whereas Adults aren't picky as long as the writing is good.

First up, I have to tel lyou that I love your B&W photo. That was my office last week!
And what great advice. I'm off to tweet it.

Much Ado About Nothing said...

This is great! And I'd really appreciate a crit. amanda.burckhard@gmail.com

Sorry - my email is hawke AT sonic Dot net - I don't know why my previous comment posted twice...odd.

I just thought I'd say great post. And I'm well aware that I'm not top-5, but I'm not ready to query anyway so no worries!

Very insightful post, Aubrey. I've been wondering about #1. I haven't written in omni-pov in years, so it no longer feels natural to me. I went back and read something that I wrote over ten years ago that was in omni-pov, and it sounded very old fashioned. Thanks for the tip. Now I know it's okay to keep writing in 1st. Thanks. :)

This is great advice! How are you enjoying being a query reader other than learning a lot?

I'm sure reading a ton of queries has to make writing your own so much easier.