Today Jolene Perry talks about how she came up with the idea for Knee Deep:


Sometimes a story is more personal than you expect it to be.

I read an article in an online newspaper that talked about the YA books coming out that year which dealt with abusive relationships.

I'd part mapped one out a while back, and thought maybe I'd work on it - all evidence that the market had just gotten an influx of them didn't sway me the way it should have…

The more I wrote in the story, the more personal it became.

I was not ever hit by my boyfriend in high school. He never screamed and yelled at me - though I heard him trashing his room a few times when I left after an argument, and he didn't hesitate to show me when he was pissed about something.

He'd pick fights with me over the phone and hang up, knowing it meant I'd sneak out to "straighten things out."

There was one really horrible night with him that I'd blocked from my mind for a long time, that I remembered when I was writing, so I used it.

I see these cases my husband talks about with women who are beaten and bruised and making up excuses and going back over and over. One ended in murder a couple of weeks ago. A case my husband will be prosecuting when it goes to trial.

The abuse story I told is nowhere near that dramatic, but so much of Ronnie's story was mine. WAY more than I realized while I was writing it. When I got to the end, and started writing down the parts of her story that were real (I always do this for my author site), I realized more and more how much of me was in that girl.

I stared at my computer screen in shock.

I had one of my best friends, who was a guy, who I shared more with than I probably did to most of my girlfriends - (like Luke from Knee Deep) and a boyfriend I'd known since I was a kid (like Shawn from Knee Deep) And I felt this draw to my boyfriend, only because I'd known him for so long, not because we really had anything left in common.

I felt more like I was stuck in this relationship, and didn't even realize I didn't want to be there until I visited a friend in college and saw how much more LIFE was out there. It was just that the idea of this one person had been in my head for way too long.

And where did I end up? Married to the best friend.

People talk about writing what you know, and then talk about keeping yourself out of your books. But you know what? I KNEW that situation - and I know I'll get some bad reviews (like you always do - ESPECIALLY when you tackle a tough topic) that are going to say that Ronnie's actions weren't believable.

But here's the thing - I told her story, the best way I knew how. Ronnie's reactions with pieces of my truth. And there are some drastic differences, but there are also some startling similarities. So, to me, Ronnie's actions were completely and totally understandable.

And that's the story of how Knee Deep came to be.

Thanks for sharing this with us, Jolene!!! 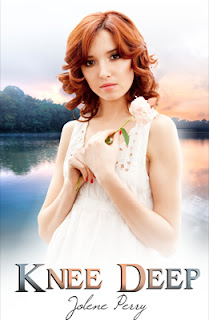 Shawn is the guy Ronnie Bird promised her life to at the age of fourteen. He's her soul mate. He's more uptight every day, but it's not his fault. His family life is stressful, and she's adding to it. She just needs to be more understanding, and he'll start to be the boy she fell in love with. She won’t give up on someone she’s loved for so long.

Luke is her best friend, and the guy she hangs with to watch girlie movies in her large blanketopias. He's the guy she can confide in before she even goes to her girlfriends, and the guy who she's playing opposite in Romeo and Juliet. Now her chest flutters every time he gets too close. This is new. Is Ronnie falling for him? Or is Juliet? The lines are getting blurry, but leaving one guy for another is not something that a girl like Ronnie does.

Shawn’s outbursts are starting to give her bruises, and Luke’s heart breaks as Ronnie remains torn. While her thoughts and feelings swirl around the lines between friendship and forever, she’s about to lose them both.

Jolene grew up in Wasilla, Alaska. She graduated from Southern Utah University with a degree in political science and French, which she used to teach math to middle schoolers.

After living in Washington, Utah and Las Vegas, she now resides in Alaska with her husband, and two children. Aside from writing, Jolene sews, plays the guitar, sings when forced, and spends as much time outside as possible.

She is also the author of Night Sky and The Next Door Boys.

Having worked as a social worker, I've seen the reality of abusive relationships too. Your book sounds fantastic, Jolene. Good luck!

Jolene, Bravo for touching upon such a subject. It's never the abusive person's fault, it it? Should be an interesting read.

Aubrie, thanks for the spotlight - appreciate it!

So nice to see Jolene here. What a powerful premise. Jolene, thanks for sharing how your own experiences and knowledge helped you write this book.