Review of Want by Stephanie Lawton 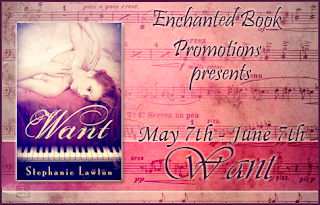 Title: Want
Author:  Stephanie Lawton
Genre:  Southern Fiction, Romance, Upper YA
Blurb:
Julianne counts the days until she can pack her bags and leave her old-money, tradition-bound Southern town where appearance is everything and secrecy is a way of life. A piano virtuoso, she dreams of attending a prestigious music school in Boston. Failure is not an option, so she enlists the help of New England Conservatory graduate Isaac Laroche to help her.

She can’t understand why he suddenly gave up Boston’s music scene to return to the South. He doesn’t know her life depends on escaping it. Julianne must face down madness from without, just as it threatens from within. Isaac must resist an inappropriate attraction, but an indiscretion at a Mardi Gras ball—the pinnacle event for Mobile’s elite—forces their present wants and needs to collide with sins of the past. 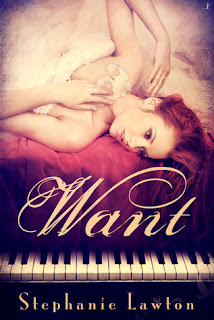 Julianne has worked hard her entire life, practicing her piano to get into New England Conservatory, to leave behind the abuse, depression, and dysfunction of her southern home. When her teacher falls ill, she meets Issac, his young nephew and a recent grad of the same school she desires so much. The only problem is, she starts to desire Issac as well. His brooding mystery lures her in. She’s not the only one with psychological problems.

As a professional musician that once auditioned at the New England Conservatory myself, I found this story to be very interesting and very real. The main character, Julianne is moody like your average teenager, but as the story progresses, you start to learn why. She has some big problems: an abusive mom, a distant dad, an urge to cut her arms to feel pain and release, and the possibility that she’s inherited her mother’s psychotic traits. She is a very brave girl who stands at the edge of an abyss. Only music can save her, but can she overcome her emotional difficulties to become a great pianist, or will it all end in a tragic train wreck?

Issac is a mystery that I kept turning pages over to solve. Why did he leave the prestigious music scene in Boston? How does he feel about his new student, ten years his junior? When the truth finally comes out, it’s shocking! Boy, did it keep me reading. Phew! The relationship between Julianne and Issac is tumultuous, yet they can teach each other so much. As Mr. Cline puts is so eloquently when talking to Julianne, “You are the student he needs and he is the teacher you need.”

Dave is another story, so sweet, hilarious, if not a little potty mouthed, and always there for Julianne. I wondered if she’d ever see him for who he really was. The love triangle kept me turning page after page! I had no idea how it would turn out until the very last page, which shows how good a writer Stephanie Lawton is.

Want by Stephanie Lawton is a powerful masterpiece of a story exploring tough issues, sweet love, and high stakes; a whopper of a coming of age novel.

After collecting a couple English degrees in the Midwest, Stephanie Lawton suddenly awoke in the deepest reaches of the Deep South. Culture shock inspired her to write about Mobile, Alabama, her adopted city, and all the ways Southern culture, history and attitudes seduce the unsuspecting.
A lover of all things gothic, she can often be spotted photographing old cemeteries, historic buildings and, ironically, the beautiful beaches of the Gulf Coast. She also has a tendency to psychoanalyze people, which comes in handy when creating character profiles.

On her thirtieth birthday, she mourned (okay bawled) the fact that in no way could she still be considered a “young adult,” so she rebelled by picking up Twilight and promptly fell in love with Young Adult literature.

She has a love/hate relationship with Mardi Gras –where does all that money come from?–and can sneeze 18 times in a row.