Interview with Sherry Jones, author of Four Sisters, All Queens 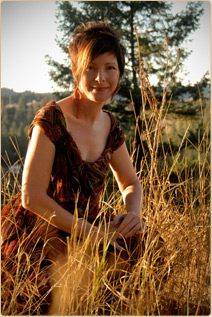 Wow, I'm so excited to have Sherry Jones with me today! I'm in love with her historical romances, and just finishing up her latest book: Four Sisters, All Queens. My review will be coming up soon...

Now for the interview!
1. I'm so impressed by the way you can bring a certain time period to life. How much research do you do before you write? How do you research for each book?

I stuff myself with history for each new project until I feel I must write or burst. I try to immerse myself completely in an era, reading not only the history of a time but also its literature, seeing the artworks, listening to the music, etc. Although I studied Arabic, I'm not fluent enough to use primary sources; the same is true for 12th- and early 13th-century European texts, which were written in Latin.
2. I love how your women characters are so strong despite the limitations they have to live within. Who are some of your favorite women in history?
My favorite women are the ones I write about. A'isha, the youngest (and smartest, and cheekiest) wife of the Prophet Muhammad, who is the protagonist in my first two novels, THE JEWEL OF MEDINA and THE SWORD OF MEDINA; Blanche de Castille, the White Queen of France in WHITE HEART; the four sisters in FOUR SISTERS, ALL QUEENS -- they kicked ass! Of course I love the snark of Dorothy Parker (as well as her writing); Marilyn French, whose feminist novel "The Women's Room" was so important to me; the courageous Rosa Parks; Susan B. Anthony and Elizabeth Cady Stanton, who gained women the right to vote; and, my contemporary heroines, Oprah Winfrey, Gloria Steinem, Hillary Clinton, Elizabeth Warren, and Irshad Manji, the courageous and outspoken lesbian feminist Muslim.
3. Where did you get the idea to write FOUR SISTER ALL QUEENS?

I read Nancy Goldstone's biography FOUR QUEENS and when I'd finished, I felt dissatisfied. I wanted to know more about these women -- I wanted to know THEM. What better way to do that than to bring them to life on the page? They literally sprang from my imagination to form discrete personalities, and I really adore them all. Marguerite is so witty and passionate, and a shrewd and astute judge of character and circumstances. Eléonore is such a fashion maven and yet also a tomboy who loves to ride and hunt, very artistic and fanciful, strong and bold, and a devoted wife and mother. Sanchia is as sweet as they come, modest in spite of her great beauty, shy and devout, and hungry for the father's love she never experienced. Beatrice is a kick in the pants: ambitious, snarky, smart, and yet full of heart. What I wouldn't give to have been a fly on the wall during one o their boudoir talks?
4. Can you tell us about the gorgeous cover? What did you think when you first saw it? What is it trying to portray?

It is a beautiful cover, isn't it? My editorial team at Simon and Schuster is responsible. They struggled to depict four queens without putting four women on the cover, which would have been far too cluttered. They decided on the image of one woman -- representing the queens' mother, Beatrice of Savoy, the Countess of Provence -- with a pillow cradling four queens' rings. The rings are authentic, researched by my editor. The photo shoot happened in London, in order to depict a costume appropriate to the era.
5. The L.A. times said you can "Make a plot dance" which is a phenomenal compliment. Do you plot each book before you write it or during the first draft?

Yes, isn't that fabulous praise? It makes plotting sound so effortless, which it almost never is.

I plot before I begin writing, after my research is mostly finished. That said, I always deviate from my outline as I write.
6. Have you always been interested in history?

I've always been fascinated by the Middle Ages, for as long as I can remember. But I never cared much for history, to tell you the truth. In school it was such a dry and dull subject entailing memorizing dates and names. Even today, nothing puts me to sleep faster than a history book!

What I like is period fiction and period films -- work that brings history to life as "story," which is the stuff of which our lives are made.
7. If you could live in a different time period, what would it be?

I'd live in the future, when women instead of men rule the world and (therefore) wars are obsolete.
8. I see you are also a classical pianist. (I'm a professional flutist by day). Who are some of your favorite composers?

My favorite composer is Dr. Robert Spittal, Washington State Composer of the Year for 2011, an amazing writer of contemporary classical music (and the great love of my life ;) ). His music is beautiful, exciting, complex, just like the man. Oh, and he's also an accomplished flutist, by the way!

I started playing the piano at a very young age, 5 or so. I loved going to my Aunt Geraldine's house and sitting at the piano, picking out songs like "Mary Had a Little Lamb." When I was in the sixth grade, a teacher came to the school and offered lessons. My mother paid $10 for 30 minutes every week, which was a lot of money to my parents at the time. In return, I practiced for hours every day -- my mother often had to make me stop because, living in a small house as we did, the sounds of my practicing drove her and my father crazy after a while!

In those lessons, I developed a real love for classical music which has never faded. Over time, I came to hold especially dear the music of the French impressionists, including Claude Debussy and Maurice Ravel. From my subsequent studies I've become enamored of Franz Lizst ("Liebestraum" has to be one of the most beautiful pieces ever written.) Bob has introduced me to Igor Stravinsky, whose "The Rite of Spring" is amazing -- have you seen the choreographed dance? He's also piqued my interested in the music of Arnold Schoenberg, whose works are now to be found on some very trippy YouTube videos. I also adore ALL opera.

When I was a child, my mother recognized in me a talent for piano, and suggested that someday I might play at Carnegie Hall. Alas, we moved around too much, my father being in the military, for me to study seriously with anyone, and piano fell by the wayside. I guess you might say that, given a choice of paths, I chose writing (and have never regretted it). But now my lover is a man whose music has been performed in Carnegie Hall! So I get both worlds. Not a bad deal.

I also love works by Igor Stravinsky, Arnold Schoenberg, Claude Debussy, Maurice Ravel, Franz Lizst, and Brahms.
9. Do you listen to music from the time period you are writing about when you write?

Yes, I listened to lots of troubadour music and masses while writing FOUR SISTERS, ALL QUEENS. And I collected quite a bit of Arabic music while writing THE JEWEL OF MEDINA and THE SWORD OF MEDINA.
10. You've lived in a lot of places in your life! Where did you like living the most and why?

I loved Philadelphia the most, because I really love the vibrancy and culture of urban life. However, I did not have many friends in Philly, despite living there for 6 years. People being what makes somewhere 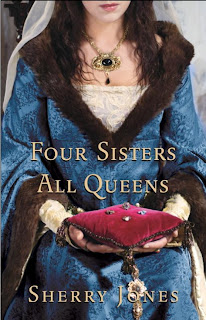 Buy on Amazon
Buy on Barnes and Noble
Rich in intrigue and scheming, love and lust, Sherry Jones’s vibrant historical novel follows four women destined to sway the fate of nations and the hearts of kings. . . .

Amid the lush valleys and fragrant wildflowers of Provence, Marguerite, Eléonore, Sanchia, and Beatrice have learned to charm, hunt, dance, and debate under the careful tutelage of their ambitious mother—and to abide by the countess’s motto: “Family comes first.”

With Provence under constant attack, their legacy and safety depend upon powerful alliances. Marguerite’s illustrious match with the young King Louis IX makes her Queen of France. Soon Eléonore—independent and daring—is betrothed to Henry III of England. In turn, shy, devout Sanchia and tempestuous Beatrice wed noblemen who will also make them queens.

Yet a crown is no guarantee of protection. Enemies are everywhere, from Marguerite’s duplicitous mother-in-law to vengeful lovers and land-hungry barons. Then there are the dangers that come from within, as loyalty succumbs to bitter sibling rivalry, and sister is pitted against sister for the prize each believes is rightfully hers—Provence itself.

From the treacherous courts of France and England, to the bloody tumult of the Crusades, Sherry Jones traces the extraordinary true story of four fascinating sisters whose passions, conquests, and progeny shaped the course of history.

Wonderful description of the novelist at work. Interesting, would live in the future, and also an interesting choice of an admired character. Such a great imagination.