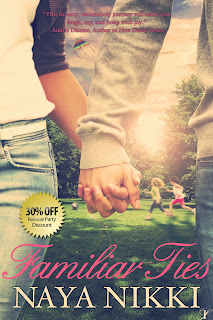 They had a history. They're friends now. But do they have a future?


Title:  Familiar Ties
Author: Naya Nikki
Genre: Adult Contemporary Romance
Publisher: InkSpell Publishing
Format: eBook, Kindle, Paperback
Purchase: Publisher | Amazon | B&N
Book Synopsis:
Max West is a widower raising Phoebe, his four-year-old daughter. Phoebe has to live with the fact that the day she was born is also the day of her mother’s death. As her fifth year without her mother approaches, Phoebe finds solace in her godmother, Amy Riley, and her daughter, Grace Crawford, another single parent family.
Amy Riley is a successful fashion designer who spends most of her days raising her four-year-old daughter, Grace, while her wayward boyfriend is travelling the world making the next best film. As the fifth year without her best friend looms she finds comfort in her ex-boyfriend, Max, and his daughter, Phoebe.These two “broken” families have a tough week to face as the dreaded day approaches.
However through their past, present and debatable future will their choices affect the outcome both parents clearly want and are simply denying? Or will Phoebe and Grace lose the only “whole” family they have ever known?

Familiar Ties is 30% off  for the first two weeks after release if you buy it from the Inkspell website! In honor of the release of Familiar ties today, Inkspell has arranged for each paricipating blog to post a line from the book and here's mine:

Here are all the participating blogs so you can go around and read each new line!

Early Praise:
“This book was heart-achingly lovely. Well done, Ms. Nikki, your books will be an auto-buy for me from now on. I'm a fan!”
~ Brooke Moss, author of “The Carny” and “The ‘What If’ Guy” – Read the full review.

“Past, present, and future converge in a nicely woven tapestry of special, life-changing moments in each character’s life. This dreamy, melancholy journey will make you laugh, cry, and jump for joy.”
~ Aubrie Dionne, author of “Paradise 21” – Read the full review.

“Naya has a way with emotions that’s hard to describe. I have read her short story "Coming Together" as well and it gave out the same glow to me. She writes from heart and has a bright future in writing. It’s unique and quite homey. A must read for anyone who is looking for some cuddling and warm love.”
~ Shilpa Mudiganti, author of “Always You” – Read the full review.

Discount:
But wait, there’s more!
For the first two weeks Familiar Ties is available from the publisher’s website at an amazing 30% discount!
What are you waiting for? Go buy your copy!