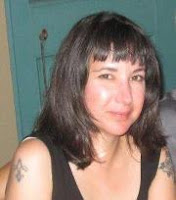 Theresa is one of my awesome critique partners! She worked very hard on Colonization: Paradise 21 (Coming out in October from Inkspell) and gave me the brilliant idea for the sequel to be told through Andromeda's arch nemesis's eyes. She left a comment saying that Andromeda's nemisis wasn't well rounded enough and needed more. That's when I decided to give the character her own book! Boy, has it turned out to be the best thing ever for this series. Thank you, Theresa, for being so honest!

Today she's visiting to tell us about her newly published story in the Vine Leaves Literary Journal Issue #2! Her story can be found on page 12! It's a story I was lucky enough to read in the drafting stages and help critique. I love this story. Everyone should click on the link and read it now!

About Theresa: Theresa Milstein writes children's books with a paranormal twist. She has also written several YA and adult short stories. Her short story "Daisy" is included in the 100 Stories for Queensland anthology and "Allured" is included in the YA vampire anthology, Fangtales. She'll also have her short story "My Moment" in the speculative fiction anthology Tiny Dancer (coming soon) in 2012. Theresa is a member of SCBWI and active in the New England SCBWI branch.
Posted by Aubrie at 6:00 AM

You are so lucky to have such an excellent critique partner.

Thank you, Aubrie. This is such a sweet post. I started the manuscript yesterday. Love the voice already!

Just popped by and read Theresa's story. It was fabulous. Intensely emotional and the last line just hit me hard at the end. Bravo.

I clicked on the link and it couldn't find the page. Dunno what happened there.

I agree with what Christine wrote - that last line just punches you in the gut. That's fantastic that you have such a great query partner!

I love Theresa's writing and that story in the Vine Leaves is wonderful. I'm expecting even greater things to happen for her soon.

I adore Theresa...She's wonderful! (I couldn't open the link.)

Here's to great crit partners. Congratulations on the story, Theresa.

How wonderful to have Theresa as a crit partner!