Giveaway: One Ebook of Golden Chariot by Chris Karlsen 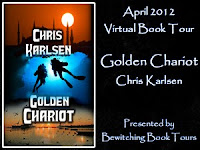 On behalf of Bewitching Book Tours, I'm happy to present a guest post by Chris Karlsen and an ebook giveaway of Golden Chariot! One lucky commenter will win! Just leave your name and email in the comments section of this post!

Take it away, Chris:

I read and enjoy both plot driven and character driven books. I prefer to write character driven stories. After attending numerous workshops and seminars, I’ve learned that like plotting, how characterization is handled is individual to the author.

I find the variance among my favorite authors intriguing. With some thrillers I read, the protagonist’s appearance is vague. This seems especially true when the running character in a series is male. In others, the hero is easy to picture, his appearance is well detailed. But in both styles, the reader is given much more of the hero as a person, which is what is truly important. I like knowing how he dresses, what music he listens to, and what he does to relax. The part that pulls me in, engages me is when I learn what he’ll forgive. I want to see how he goes about analyzing a problem and what he has to do to solve it. What is he willing to do?

In romance, which is what I write, the hero and heroine’s appearance has a more dominant role in the story. By personal choice, I don’t make either the handsomest or prettiest person in the room. I’ve made them handsome and pretty, yes, but in the cases where I’ve done that, I worked to build in many aspects of their personalities. The hero and heroine’s attraction for each other is more than physical.

In my latest book, Golden Chariot, I deliberately played down the physical. Is the hero, Atakan Vadim, a nice looking man? Yes. Is the heroine, Charlotte Dashiell, a nice looking woman? Yes. Their relationship and how it grows is based on respect, shared humor, and trust. They didn’t have to be the handsomest or prettiest in the room. What mattered was how they saw each other.

I chose to focus more on their goals, what they wanted for themselves and what path they took to overcome adversity. As I wrote them, I strived to uncover what they were willing to sacrifice.

In Golden Chariot, Atakan is an agent of the government. He prides himself on his professionalism. There is a point in the story that he must make a choice regarding Charlotte that jeopardizes his position. Charlotte, a nautical archaeologist, is driven to prove a controversial theory. She has one opportunity, which is the shipwreck project in the story, to find evidence for her theory or forfeit all she’s worked toward for years. That ambition drives her decisions even though it puts her life at risk.

While attending a Don Maass seminar I received a great piece of advice when developing characterization. I’m paraphrasing, but Don suggested having the characters do the unexpected. Your hero or heroine says or does something that he or she can’t take back. It doesn’t have to be a game changer but it has to have dramatic effect. This can also apply to the antagonist. He or she does a random act of kindness or shows an unexpected sense of humor. This doesn’t have to be a game changer either or have the same dramatic effect as the unexpected deed of the protagonist. But it does help to flesh out the antagonist as a character. It adds interest, he or she is not a one-dimensional villain.

I had finished the rough draft of Golden Chariot when I attended the seminar. When I did the second draft I applied Don’s suggestion. I had Charlotte make an unethical choice, foolish and knowingly wrong. Her choice had a dramatic negative effect on her relationship with Atakan. It ramped up the tension and gave her a new stressor. She had to regain his trust or lose everything.

The antagonist is a contract killer, cold blooded and without mercy. He was once with an elite Russian military unit that fought in Chechnya. I gave him a moment with a blind veteran of that war. It didn’t change him as an evil character but I feel it added an interesting side to his personality.

I think the most important part of characterization is your willingness as an author to dig deep. Don’t shy away from having the hero and heroine react in a way that makes the reader sit up and go, “Oh, no.” Or “Oh, yes.” 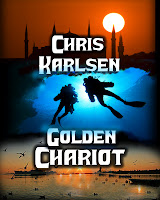 Myth, murder, and money clash in this gripping undersea adventure.

The rare discovery of a ship sunk during the time of the Trojan War has been found off the coast of Turkey, near Troy. Charlotte Dashiell is an American nautical archaeologist and thrilled to be part of the recovery team. The wreck may contain proof of her highly controversial theory about the Trojan War.

Charlotte is present when the Turkish government agent assigned to guard the site is murdered. Her possible involvement and a questionable connection to a private collector of black market relics bring her under suspicion. Atakan Vadim is the Turkish agent sent to investigate her. Unknown to either of them, the smuggler behind the murder plans to steal a valuable artifact and frame Charlotte for the theft...after they murder her. 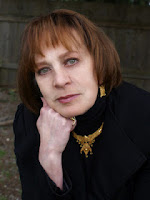 Chris Karlsen is a retired police detective who spent twenty-five years in law enforcement with two different agencies. Her father was a history professor and her mother an avid reader. She grew up with a love of history and books.

She has always loved traveling and has traveled extensively throughout Europe, the Near East (especially Turkey and the Greek Islands), the Caribbean, and North Africa.

Born and raised in Chicago, Chris has also lived in Paris, Los Angeles, and currently resides in the Pacific Northwest with her husband and four rescue dogs.

www.chriskarlsen.com
Posted by Aubrie at 9:34 AM

Thank you for inviting me here today. Characterization is such an important aspect of a story to me. Pacing, plot and action are important too but I tend to really fix on the characters in the books I read.

I hope your followers found the article interesting. I love to hear from readers. They can reach me at www.chriskarlsen.com or chriskarlsenwriter@gmail.com.

Have a great day,
Chris

I have heard Donald Maas speak. He is a great motivator. Your book sounds like a thrill a minute. It's on my TBB list.

Hi Lorrie,
Don is a wealth of information. I just returned from another week long workshop of his. It was BONI 2.0, very intense but I got excellent feedback and ideas for my current book.
I hope you can enjoy "Golden Chariot," soon. I'd love to hear your thoughts on the story when you finished.
Chris