Giveaway and Promo: The Slayer by Theresa Meyers 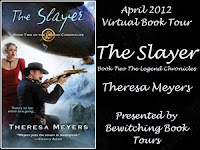 On behalf of Bewitching Book Tours I'm excited to present a new release by Theresa Meyers and a giveaway!

Look at this awesome cover:

Brothers Winchester, Remington and Colt know the legends—they were trained from childhood to destroy demon predators, wielding the latest steam-powered gadgetry. It’s a devil of a job. But sometimes your fate chooses you...

Winn Jackson isn’t interested in hunting nightmares across the Wild West—even if it’s the family business. Unlike his rakehell brothers, Winn believes in rules. As sheriff of Bodie, California, he only shoots actual law breakers. That’s what he’s doing when he rescues the Contessa Drossenburg, Alexandra Porter, a lady with all the elegance of the Old World—grace, beauty and class. And then he sees her fangs.

Alexandra isn’t just some bloodsucking damsel in distress, though. She’s on a mission to save her people—and she’s dead certain that Winn’s family legacy is the only way. Luckily, aside from grace and class, she also has a stubborn streak a mile wide. So like it or not, Winn is going to come back with her to the mountains of Transylvania, and while he’s at it, change his opinions about vampires, demon-hunting, and who exactly deserves shooting. And if she has her way, he’s going to do his darnedest to save the world.

Raised by a bibliophile who made the dining room into a library, Theresa has always been a lover of books and stories. First a writer for newspapers, then for national magazines, she started her first novel in high school, eventually enrolling in a Writer's Digest course and putting the book under the bed until she joined Romance Writers of America in 1993.

In 2005 she was selected as one of eleven finalists for the American Title II contest, the American Idol of books. She is married to the first man she ever went on a real date with (to their high school prom), who she knew was hero material when he suffered through having to let her parents drive, and her brother sit between them in the backseat of the car. They currently live in a Victorian house on a mini farm in the Pacific Northwest with their two children, three cats, an old chestnut Arabian gelding, an energetic mini-Aussie shepherd puppy, several rabbits, a dozen chickens and an out-of-control herb garden.

You can find her online on Twitter, Facebook, at her Web site or blogging with the other Lolitas of STEAMED!


And now for the giveaway: 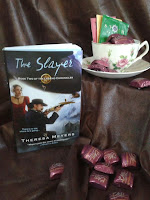 
Enter to win an Advanced Reader Copy of Theresa Meyers' second book in her Legend Chronicles steampunk romance series, THE SLAYER, along with an autographed cover flat and an antique china cup (cups will vary) accompanied by an assortment of teas and decadent Bliss chocolate.
Posted by Aubrie at 6:00 AM