Flashes of Foxwick by Cherie Reich

I'm so excited to tell you about my critique partner's new release! As part of the blogging A to Z challenge, she wrote flash fiction pieces about the Kingdom of Foxwick and all its magical inhabitants.

These pieces of flash fiction are fantastic little windows to a magical world that I yearn to know more about!

In honor of the A to Z Blogging Challenge, A TO Z FLASHES OF FOXWICK​, twenty-six flash fiction pieces, gives a glimpse to the characters, magical creatures, and lands in the fantasy world of the Kingdom of Foxwick. A young dragon befriends a dragon seer. A phoenix bursts into flames in mid-flight. A man must choose between his simple life and one of fame. A queen will find her heart turned into ice and many more!

This collection includes the bonus short story "Lady Death" from the forthcoming WOMEN OF FOXWICK. In "Lady Death," the king’s assassin and princess, Umbria agrees to her brother's insane idea to assassinate Death to save her family. As she journeys to the Shadowlands, she's prepared to die for this assignment, but she may never be prepared to see the shades of her own parents there.


This is a great deal for only 99 cents on Amazon! 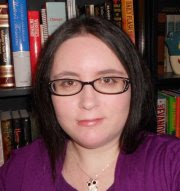 Cherie Reich is a writer, freelance editor, book blogger, and library assistant. She enjoys writing horror, fantasy, and mysteries, but she doesn't let that stop her from trying other genres. Her short stories have appeared in magazines and anthologies, and her novelettes are published as e-books. She is a member of the Virginia Writers Club and Valley Writers and placed third in Roanoke Valley's BIG READ writing contest.


A self-proclaimed bookworm, Cherie received her bachelors of the arts in Classical Antiquities at Missouri State University. She currently lives in Virginia with her family and four adorable pets: Cinderella the cat, Romeo the cat, Abby the guinea pig, and Dash the goldfish. Besides working in a library, she is surrounded by over 1000 books in her room at home. Can anyone say bibliophile?

She's also one of the best critique partners in the whole world!

Congrats, Cherie! I wish you many, many sales!
Posted by Aubrie at 6:00 AM

Cherie is the publishing maven these days! I had a glimpse of her book on her blog today. Good stuff!