Today I'm excited to share an excerpt from this new release.

28-year-old San Francisco native, Allie Taylor, at least thought she was human. But when she meets her first real seer, a race of human-like beings discovered in the 1900s, he tells her that not only is she a seer, like him, but that all the other seers believe she's going to end the world. Unfortunately, no matter what she does, everything that happens after that only seems to prove him right.

We approached Seattle. I glimpsed a skyline to my left, then flashes of buildings through a maze of overpasses dripping with dark green plants.

I recognized landmarks from being here with Jon, but couldn’t read signs with how fast we were going. I’d stopped looking at the speedometer. Revik was doing something in that other place, so I couldn’t use his grid thing. I felt a few people point as we passed, and other vehicles pulled over, moving out of the way of the line of cop cars screaming behind us.

I felt it when the third cop car ceased to be a pull toy between Revik and whoever else. I felt Revik lose and let go just before the cop accelerated, coming up on us blaring light and sound. I glanced over in time to see the dark-skinned cop smile at Revik, making an odd flowing up and down gesture with one hand that had the flavor of a taunt.

Then whatever held the cop’s body let go, leaving the cop sweaty-faced, determined, and completely focused on the two of us. From his eyes, he fully believed we’d killed his whole family with baseball bats then lit his house on fire.

Revik turned to me, his pale eyes hard.

“Stop the car,” he growled.

I thought I’d heard him wrong. “What?”

Behind him, I saw the Seattle cop raise a shotgun. Before I could react, Revik grabbed the wheel, jerking it sideways to slam into the cruiser. The cop dropped the shotgun.

He pointed and I veered, braking to slide across lanes.

I saw the truck driver, who was still, amazingly, behind us, begin the turn to follow, glimpsed faces as other, noninvolved drivers reacted, eyes widening in fear as they tried to get out of my way, instead coming even more dangerously close to hitting us. I slid behind the Washington cop, in front of a different trucker who honked madly.

Then we were past, wincing from the scrape of metal as the GTX grazed his grill.

Revik leaned out the window, firing at the Seattle cop from behind. He blew out a rear tire with the first shot, smashed the back window with his second. He chambered another round and aimed again, blocking my side view when he climbed up to sit on the passenger side window.

The Seattle cop cut across multiple lanes and again I felt the difference; it was no longer a human driving, but one of those things with lightning-fast reflexes and 360 degree vision. I was forced to brake, saw Revik clutch the window frame as he lost his balance. The Seattle cop swerved, just making it onto the exit off-ramp behind us. A sign flashed by.

Revik slid back in through the window, landing on the seat. When I looked over, his shoulder was bleeding again, a dark spreading stain under his shirt.

“You are trained in basic firearms use?” he said.

“Right,” I said, loud over the wind and engine. “Dad taught me to shoot cans. I'm practically special forces.” 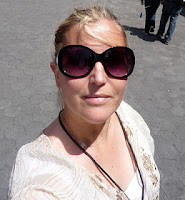 JC Andrijeski is a bestselling author who has published novels, novellas, serials, graphic novels and short stories, as well as nonfiction essays and articles. Her short fiction runs from humorous to apocalyptic, and her nonfiction articles cover subjects from graffiti art, meditation, psychology, journalism, politics and history. Her short works have been published in numerous anthologies, online literary, art and fiction magazines as well as print venues such as NY Press newspaper and holistic health magazines.

Obtaining an MA in political science from the New School for Social Research (NSSR) in NYC, she did her graduate studies in race and caste systems, slave and ex-slave systems, religion and its impacts on social systems and other historical weirdnesses which fitted her surprisingly well for both fiction writing and being extremely annoying at parties. She moved from NYC to San Francisco in 1997, and otherwise has lived or spent considerable time in Albuquerque, Portland, Los Angeles, Seattle, Vancouver BC, New York, Florida, San Diego, Prague, London, Berlin, Sydney and Swinoujscie, Poland. JC currently lives and writes full time in Sidhpur, India, at the foot of the Himalayas in Himachal Pradesh, a location she drew on a fair bit in writing the Allie's War books.

A fascinating life with so many experiences, no wonder that it has led to a best selling author.

Hey, thanks, Carole! And thanks for checking out the excerpt, I really appreciate it! :)