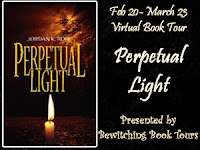 Take it away, Jordan!

Hi Aubrie. Thanks so much for hosting me. I’m very happy to be on Flutey Words today as part of the Perpetual Light Blog Tour. I thought I’d talk a little bit about my writing process.

For me the story is all about the characters. What happens in the story is defined entirely by who is in the story. I have not yet had a plot idea come to me before a character idea. And in fact, I’ve got well-defined characters waiting to tell me their stories. What in the world they’re waiting for is beyond me!

In Perpetual Light Lucia was the first character to develop. The very first trait I learned about her was that she was a woman repeatedly being reincarnated to find her soul mate. Of course, this idea has been written before so I wondered what would be different about her.

I didn’t wonder long. The idea that she was reincarnated and her soul mate was a husband who’d been stolen from her and made vampire came very quickly. Then the easy details came—like her long, curly hair and green eyes, and her job as a buyer of women’s accessories for a large upscale store.

Vittorio came next and was more difficult to write because he was (as my husband points out) typical of the type of men I find attractive—tall, dark, wavy hair, hazel eyes, muscular with chest hair, Italian. Well, what can you expect? They lived on a vineyard in Italy in the 1600’s. He was more difficult because I found myself sort of daydreaming about him, which made it very challenging to focus.

Character development is the crux of the story for me. My current work in progress is an Eva Prim story. Eva is entirely different from Lucia and if faced with the same conflicts, she would respond in a completely different, if not the exact opposite way.

For example, Lucia is a divine vampire slayer who is fated to kill her husband. She so desperately wants to avoid this outcome that she has refused her destiny, run from it, thus putting herself in a weakened position. Eva, on the other hand, in spite of being a vampire would be more than happy to harness her powers and dispose of a few vampires. She might even consider taking down Stefan, her master and husband, though she’d regret it in the end. But, she’s hot-headed and emotional so she’d get the job done one way or another, if that was her task.

Thank God it’s Lucia with these powers. Otherwise, if I know Eva, I’d be writing about her reactions to getting kicked out of Grief Support Groups as she lamented the loss of her husband and blamed everyone else for it. She’s a pip and keeps me guessing.

All my characters keep me guessing to some extent, and I love that. I love that I didn’t know right away that Lucia was a Pharo of Redemption, a soul destined to bring lost souls back to The Light. With that knowledge I might have tried to work the story in a different direction. Instead, I fell in love with each of the characters, well, all of them except the bad ones. Now, I hate the thought of losing any of the supporting characters, but I know full and well some of them will leave us. I just hope it’s not too soon!

I’d love to hear about the little details that make you love characters. A phrase or relationship that showcases a particular character. What is it that endears a character to you, whether you’re writing the story or reading it?

I’d like to offer a $10 gift certificate to Harvard Sweet Boutique to one random commenter. All you have to do is comment on the post to be entered to win. To increase your chances of winning connect with me via one or more of the social networks listed below.

Friend me on Goodreads: http://www.goodreads.com/author/show/5751865.Jordan_K_Rose

Follow my blog via the networked blog button on my site. http://www.jordankrose.com/blog/

Everyone who comments is entered into the grand prize drawing for an eReader- Kindle Touch or Nook Simple Touch.

Fate is cruel. Especially when the one you’ve sworn to love for all eternity, the very soul who changed your destiny is the last person you should trust.

After more than three hundred years of running, Lucia Dicomano must make a choice.

Forced to take her place as a Pharo of Redemption, the divine slayer needs to master her forgotten powers. Lucia turns to Vittorio, the one vampire she’s failed to deliver from eternal damnation. But overcoming smoldering remnants of love, lust and anger aren’t their only obstacles.

Samuel, who may know Lucia better than she knows herself, hunts her with a fervor stoked by a thousand years of vengeful hatred. His plan—capture and enslave the weakened Pharo then take control of her elusive power.

Can Lucia trust Vittorio long enough to reclaim her powers? Or will she have no choice but to kill him and battle Samuel alone? 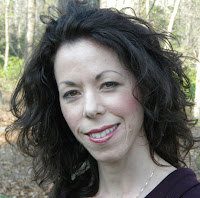 After trying her hand at many, many things- from crafting and art classes to cooking and sewing classes to running her own handbag business, Jordan finally figured out how to channel her creativity. With an active imagination and a little encouragement from her husband she sat down and began to write, each night clicking away at the keys with her black Labrador, Dino curled up under the desk.

A few short years later she’s entered the publishing arena with no plans to ever turn back.

Jordan’s a member of Rhode Island Romance Writers, as well as RWA National, and the New England (NEC), Connecticut, and Fantasy, Futuristic and Paranormal (FFnP) Chapters.

Her first book, Perpetual Light, releases in February of 2012 from Crescent Moon Press.

Jordon, I think you are so right on when you say the characters are the most important aspect of the stories. After all, if the reader can't connect with your characters, it doesn't matter what story is told. It's nice to know that you let them guide you along through the story.

Many stories can seems so forced if the writer feels the need to intervene.

Another great post! I'm really enjoying learning about you, your characters and your writing habits. Off to share!

Oops. I think I was supposed to leave my e-mail. Sorry.

I work the same way as you do. My characters have always come first and they lead the story. I love to read books with great characterization. Yours sounds great!

Thanks so much for coming along on my Blog Tour! It's great to have you and fun to find out how other writers and readers feel. I'm not a plotter and only when I feel like my story is heading off into outer space do I feel the need to sit down and plan what might be about to happen. And even, then I'm very vague because the details really do come from the characters. I know a number of writers who are plot driven and after they know where the story is going they develop their characters.

Sometimes I'll admit to being a little bit jealous of that level of organization, but I just can't get there. It doesn't work for me. I have to let the characters come to life and "tell me" their stories. I enjoy it. Not too long ago I emailed my critique parter some surprising information about my current work. I couldn't believe the direction the story took. I love that surprise, the not knowing how my story will end makes it so much fun! Jordan

Love the Italian names! I have a character in my first book named Vito.

Hi Jolie. I had an Uncle Vito! But no one in my family was named Vittorio or Lucia. That would have been a little too close to home! Thanks for stopping by. Jordan

Jordon, Your story sounds very interesting. Characters, for me, grow with the story. I have some idea of the plot, but the characters do lead the way, revealing themselves as I go.

Thanks to everyone for stopping by and commenting.

Aubrie, thanks for having me. It was great fun. Jordan

Woot! Thanks so much, Jordan!