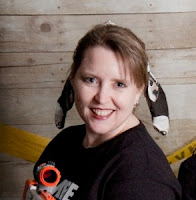 Thanks so much, Aubrie, for having me as a guest today!

Your Welcome, Natalie! I'm so excited about your upcoming release! Now for some questions:

1. First, tell us about what you thought when you first saw your fantastic cover!!!

I fell instantly in love with the fonts. LOL Isn't that silly? But I LOVE all the little details, the brilliant white of the moon behind the title, the fonts used for my name and the series box, even the scrollwork on the box itself and the details on the spine and back for the paperback. All of those are great contrast to the colors, and very eye-catching.

She's very take charge and bossy, which is very much like me. I had to tone her down some, but even in the first draft, she wasn't as bossy as I am. First-born child with a little brother. Can't help it! LOL But she's not like me in other ways—I'm blessed with a large, loving, close family, while Quinn is adrift, with no parents or siblings. She also has two guys who love her. I don't need that, my husband is plenty, but I'd take these two in a heartbeat! LOL

3. Tell us about the hunk riding the motorcycle!

Nick doesn't actually ride one in the book! But that's okay, because he totally would if it were practical. He's a protector, traveling the country to protect goddesses who are at risk and without access to their power sources. His job is a family legacy that he upholds by himself, so he'll never allow a relationship with the heroine beyond being at her side one week a month.

4. Where/how did you come up with the idea of goddesses and how someone can drain their power?

I love writing paranormal, and I'd had an idea for a different kind of goddess story, something more chick-lit-y. But I wanted to write about these two guys I had in my head, and put the two ideas together in a kind of creative big bang right before NaNoWriMo a few years ago.

Goddesses are descended from the ancients, through the maternal line, and there are no gods. But in the right circumstances, a goddess can bestow a bit of her power onto a male. The problem is that he can't hold on to it. Once he uses it, it's gone. But he's already addicted, and feeds that by stealing from other goddesses. More details on this come up in Heavy Metal, the second book in the Goddesses Rising series.

5. How did you find Entangled Publishing and why did you choose to go with them?

I heard about them through the grapevine when they first announced themselves, but I've seen so many small publishers come and go, I dismissed them at first. Then I found out the owner started Savvy Authors, which had impressed me a great deal. Research told me there was a solid business foundation to Entangled, and the staff was impressive, too. I liked the publicity factor, which was unique, and I talked to some already-successful, agented authors who were impressed and had already signed contracts. They seemed to be the perfect home for this series, and everything I've seen since has impressed me more.

6. Any advice for writers out there?

I usually say "if you can quit, do it," because this business is so hard, but it's also in such upheaval right now. I have to change my standard advice to "learn everything you can, and then learn some more." Not just about craft, but more importantly, about business. There are so many options for us now, and so much out there that seems spectacular but is really not in an author's best interest. What's right for someone else may not be right for you, and vice versa. You have to make well-informed decisions, and manage your expectations. Always keep your eyes open, and then you can't regret any choice you make, no matter what the result.

Working hard on Heavy Metal and Sunroper, the other two books in the trilogy, are at the top of my list. I also have a book coming out in April called Acceptable Risks, a non-paranormal romantic adventure featuring a guy who died but wasn't able to attend his funeral. ;)

Under the Moon, GODDESSES RISING - Book One - by Natalie J. Damschroder will be available in December. You can preorder it on Amazon or Barnes and Noble.

Good luck with your fantastic upcoming release!!!
Posted by Aubrie at 6:00 AM

Great to be able to 'hear' another writer talking about her work.

Thanks for coming by, Carole Anne!