Michelle is stopping by today as part of her Bewitching Book Blog Tour for her latest Release, Another Chance.

How do I research-let me count the ways! - a blog by Michelle Beattie

As a (mostly) historical writer, I'm often asked how I do my research. Well, since it's not possible to time travel (but wouldn't that make things so much easier) a writer must make do with what we have available.

Obviously the first is the Internet. It's easier, I don't have to warm up my van or scrape the ice off my windshield. It's fast and convenient. It can also be a huge time suck and a major distraction. You start at one site looking for information on saddles and three hours later you're on another site reading about the migration of penguins. Or maybe that's just me.

For my pirate series, I used a lot of library books, for the reason mentioned above. I was getting lost on the information superhighway and there wasn't a traffic cop anywhere in sight, so for those books the library was a huge help.

Talking to people, is, by far, my favorite way of researching. For Love By Accident, my contemporary park warden book, I traveled to Jasper, Alberta and met a park warden who was instrumental to that story. He showed me his work truck, his tools of the trade, his office. He read my scenes. Of course, that's a little easier to do with a contemporary but it's so nice to be able to have your questions answered right away, to be able to get feedback, which, inevitably, makes me ask more questions.

For Another Chance, I used the internet, but I also went and spoke to a few horse people around (no shortage where I live). I was shown wagons, saddles, etc. Yes, maybe not to the same exact detail they would have been back then, but it gave me a picture in my head. For the surgery at the beginning of the novel, I called a vet clinic. Explained it was a historical and how would it have been done and I got help that way. Is it exact? Close. As close as I could manage it.

I've saved my best method of research for last. Role playing. Oh, come on, we've all done it. For my third pirate novel, A Pirate's Possession, I had my heroine trying to punch the hero with one hand while he was holding her other one. I couldn't figure out how he'd avoid it, so I asked my husband. I explained what was happening in the book, I had him hold my arm down and I swung up with the other. He let go my hand but grabbed me so fast and lifted me off the ground I was forced to hold onto him for balance and thus saved him from the punch (I wouldn't have. Honest). But the point is, I never would have thought of that if we hadn't role played. Of course, he then threw me on the bed, but that's a whole other blog!

And so I throw it out it you. What method of research is your favorite and why?

Now for a look At Michelle's Latest Release: 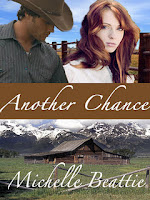 Being a veterinarian in the late 1800’s is difficult enough, but for Jillian Matthews it’s impossible. Not allowed in the vet schools, she trained at her father’s side until she had the skills needed to move west. Jillian accepts an advertisement for a position in Montana, using only her initials which happen to be same as her father’s. Convinced that in the untamed west, her skills will be valued and appreciated, regardless of her gender, she’s quickly proved wrong.

Wade Parker is sure the pretty redhead claiming to be the vet he sent for is one of his ranch hands’ practical jokes but the fiery woman very quickly puts him in his place and proves him wrong. His impression, however, turns south when the animal she operated on later dies. With a ranch on the verge of bankruptcy, losing an animal was the last thing he could afford and he can’t help thinking the old vet, the male doctor, wouldn’t have let his animal die.

With Wade’s initial reaction guiding them, the town is quick to want Jillian out. But the more Wade gets to know Jillian, the more he sees her grit and compassion, the harder he falls for her. When Wade realizes he was too hasty in his judgment and urges the town to give Jillian another chance, he makes more than few enemies. Enemies that would do almost anything to get her out, and to make sure Wade doesn’t take her side again.

Soon threats turn to violence and both Wade and Jillian must make a stand. The problem is, at what cost?

Michelle Beattie has been writing for 16 years. Her first pirate novel was released in December 2008 under the title, What a Pirate Desires. Since then she added two more to her series, Romancing the Pirate and A Pirate's Possession.


Changing gears a bit, Michelle has decided to follow the growing trend of published authors independently publishing their own books. She released her first independent title, a contemporary light paranormal, Love By Accident, in October and is following it up with a historical western, Another Chance.


Her pirate books have received wonderful praise from publisher's weekly, Romantic Times and several on-line review sites as well as have been published in several languages. Love By Accident hit #14 in ghosts on Amazon's site on its release day.


Michelle lives in Alberta, Canada with her husband, two daughters and a rabbit.

Thanks for stopping by, Michelle! I had a rabbit growing up. :)

Aubrie, I love my rabbit! He's quiet and I always where he is! Thanks for having me!

tramadol online tramadol overnight - high does tramadol get you