My First Newspaper Interview is Tomorrow! 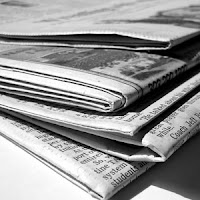 Two days ago I summoned my courage and called my hometown newspaper. Thinking they'd hang up on me, I told them about how I lived in Derry and I had a new release out.

The woman on the phone asked what it was about and I stumbled all over my words. It's sci fi, but it's not hard sci fi. It's romance, but also action and adventure...

Whatever I managed to get out worked, because I'm going in tomorrow for an interview. And she's going to take my picture! (I'm already sifting through my closet for something nice to wear!)

This goes to show that all you have to do is put yourself out there and ask. You never know when people will say yes.

Everyone with a book released this year, google your hometown newspaper and ask.

Hopefully later on I'll have a link to the article if they put it online!
Posted by Aubrie at 1:44 PM

Yay!! And now you need to contact your local TV stations and see if they'll do a live interview with you on the news. They do that on Saturday--or is it Sunday--mornings with an author. Most of them are self-pubbed ones, so if they have that opportunity, they'd jump at a chance with you. Don't forget to tell local bookstores and libraries as well. :)

Wow! Congratulations! That's awesome. I'm proud of you for taking that step. It would make me nervous too. I hope they put it online.

Aubrie,
Can you come in to the Derry News office a bit later Thursday? I was just asked to sing at a funeral at my church here in Derry. I not only write, I sing! Could we move it to noon? I appreciate it. Look forward to meeting you! Julie Huss

Congrats on the interview. I like the book and it wasn't too romancy for me. I attempted another author's book that was kind of scifi/fantasy mixed with romance and it crossed the line, Paradise 21 does a good job integrating the two.

That's awesome! I agree with Cherie - you should contact your local TV stations too.

Good for you! You put yourself out there and it paid off. Good luck with the interview! Knock 'em dead.

Congrats and I hope you have a good time. Good luck.

Woohoo! Congrats and good for you for asking. I would probably stumble all over the "What's it about?" question too. How exciting.

I have a couple of awards for you on my blog. :)

That is fantastic news, congratulations!!! :)