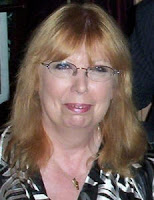 Catherine is a fellow author at Gypsy Shadow Publishing, the publisher that's published a lot of my short stories. She's visiting today to talk about her new story Say A Little Prayer.

Thank you for taking the time to visit us, Catherine!

1.What got you started in writing?

It’s so long ago now, I can’t remember! Ever since I was a small child, I have made up stories and invented characters. I was an only child so I probably had more time on my own than if I had had siblings. It just seemed the most natural thing in the world to put those stories racing around my head onto paper as soon as I was able to. I remember wanting a typewriter so much, I sold my dolls’ house, dolls’ pram and anything else I could lay my hands on and bought a little portable Smith Corona when I was nine years old.

Jim Morrison – what a sexy man and highly intelligent too. For all his wild reputation, he was also a gentleman and had a great sense of humor. And he made great music with The Doors. Marilyn Monroe – much more than the dumb blonde roles she so often portrayed. I find her a fascinating character. Oscar Wilde – his writing is sublime and his witticisms were so far ahead of his time. In fact the man himself would be far more appreciated nowadays – and far less troubled.

3. Have you ever met a celebrity in person?

I once met the Duchess of Kent when she came to visit a newspaper I was working for. Somehow she managed to appear genuinely interested in the finder points of Classified Advertising. Now there’s class for you!

4. Your cover is wonderful and my favorite color blue! What did you think when you saw it? Did you have any input in designing it?

Thank you. I love it too. When I first saw it, I thought it was stunning and captured some of the essence of the story really well. We would have got into copyright problems with any iconic photos of Jim Morrison or Marilyn Monroe so that was never going to work. Unusually for a publisher, Gypsy Shadow do involve their writers in the cover art and I am very grateful to them for that.

5. Tell us about your future works!

I have a novella (just under 30,000 words) coming out in October called ‘Cold Revenge’. This is a paranormal horror about 4 people who get a lot more than they were expecting when they and their partners accept an invitation to dinner…

In a departure from my usual genre, ‘The Dust Storm’ is a futuristic short story which will be published later this year by Gypsy Shadow. It takes place in the 24th century, when the world is choking to death from global warming and is a savage and inhospitable place. My two main characters have the chance of escape, but can they escape the lethal Dust Storm?

6. Where can we find out more about you?
I can be found in all sorts of places but these are the most usual:

‘Say A Little Prayer’ is available from Gypsy Shadow Publishing.
And from major online booksellers including Amazon.
Posted by Aubrie at 6:00 AM

Wonderful! I am an only child too, so can strongly identify with the whole concept of writing down the stories you invented as a child. I loved the idea you sold all your "worldly goods" to buy a typewriter! That is goal-oriented! Hurray for you.

When I was a teen the Doors were one of my fav groups. Of course my mother hated them so that made it all the better. Rebelious teen. lol

Lovely interview. I got my first typewriter as a 21st birthday present. And I met Prince Philip once at a college event. Nice to "meet" you here Catherine.

Great to get to know you better!

I enjoyed reading this interview. Knowing you want to write stories even as a child means you were born to write! :) Gotta love that clackety-clacking sound of a typewriter. I always seemed to run into or past celebrities but I never officially met any of them. LOL

Thank you so much for this opportunity, Aubrie and thank you to everyone for their kind comments. Who knows? If Jim and Marilyn do sell a million, I may just send them off on some more 'missions'!