Who's Watching the Oscars? 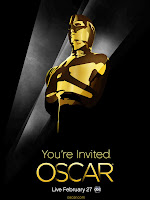 I've seen 127 hours and True Grit, and I'd like to see if Natalie Portman gets the Oscar for Black Swan.

Also, a favorite actor of mine since I was 12 is finally nominated for his first Oscar this year: Christain Bale. I remember watching him in Empire of the Sun, and my all time favorite: Treasure Island with Charleton Heston as one of the best pirates ever. 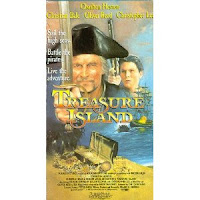 Do you recognize Christian Bale in the background? Oh the many nights I stayed up thinking about being on that ship when I was 12. We watched it in my six grade english class and that's when I fell in love with the idea of pirates and that talented actor. I've watched his progress ever since: Little Women, Batman, even as one of the voices in Disney's Pocahontas.

Now he's nominated for The Fighter. I didn't see it because I hate watching boxing, but I still hope he wins.

What about you? Any Oscar picks?
Posted by Aubrie at 2:18 PM

I probably won't watch the Oscars, but I would like to see some of the movies nominated, including The King's Speech and Black Swan.

*laughs* I probably will have to edit during it or something. I did finally figure out what was off about that one short story you read, so I definitely plan to fix it and submit. :D

I've seen The Fighter and The King's Speech and I do hope the latter sweeps it all.

But Christian Bale can win, if you like [g] I saw him first in the movie they made of the Julian Barnes novel Metroland. And hey, I didn't know he'd played Laurie in a version of Little Women! That must be fun to see.

No Oscars for me, but I am dying to see The King's Speech (and Inception - still haven't gotten to that one!). I am probably the only person in the world who saw Derek Jacobi in the previews and squeed. *CADFAEL!*

I would hate to be a nominee in the Visual Effects category. Looks like stiff competition.

Ooo I loved Black Swan! Natalie so deserves to win :)

The Arrival, only .99c on Amazon
www.damselinadirtydress.com

I used to watch the Oscars all the time before I had kids. Now I don't see as many movies so I'm kind of out of the loop on what's out. Wah. Does this mean I'm getting old? LOL

I haven't watched awards shows in ages, but I do keep up on imdb.com.

I'll definitely be checking in!

I don't get to the movies much so I don't watch the Oscars very often. It's fun to peek in now and again to see who's winning and what they're wearing - but I'll be watching the Scotties instead (Canadian women's curling championship) :)

Ooh, I was distracted for the last little while watching it.. but I forced myself to return to my desk right now to get some work done..

Apparently, I'm STILL distracted, since I'm visiting instead of working ;)

Hope you had a fantastic weekend!

My attention span is waaay too short to watch the Oscars. I like finding out who won the next morning. And I learned your fave won! I really want to see The King's Speech. I first fell in love with Colin Firth in Pride and Prejudice. Sigh.

Unfortunately, I was out-voted on watching the Oscars. The same thing happens every year. Hope the dresses were pretty . . . P.S. I want to watch The King's Speech. I really like Colin Firth ; )

I'm late to this conversation, but I wanted to add that if you are a big Bale fan, you MUST see The Prestige (now out on DVD). I think it's one of his best roles ever. And it's a mind-bendingly awesome film.

I didn't know about his role in Treasure Island. Did you see him in Henry V when he was just 14 or in Newsies at 16? I don't think the guy ever had an awkward period.

If you're going to talk about Christian Bale, don't forget Newsies.

I watched about 30 minutes of it, hated it, and changed the channel. How about you?

Alice in Wonderland won for cinematography or something, which was well-deserved!