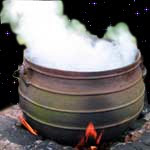 Caldron's Brew, my short story based on the Celtic myth of the Dagda is up at Moon Drenched Fables!

Wikipedia states, "Tales depict the Dagda as a figure of immense power, armed with a magic club and associated with a cauldron. The club was supposed to be able to kill nine men with one blow; but with the handle he could return the slain to life. The cauldron was known as the Undry and was said to be bottomless, from which no man left unsatisfied."

Not an attractive God by any means! 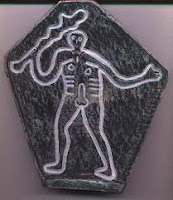 This is my first acceptance by them, so I'm excited.

Yay! "Caldron's Brew" was such a fun story to read. *skips over to vote for it*

Congratulations! :) I'll pop over and vote, too.

Yay, congratulations! I'll be jumping over to read and vote. :)

What a great story. I really enjoyed it. Voted too! :)

Congratulations Aubrie! I'll definitely be stepping on over to check it out!!!

I've missed you blogging, but I'm glad to know you've been productive writing. I'm on my way!

Yay!! Congratulations! I'm off to read and vote too :)

Congrats on the release. I hope you win.

That was great. I explored the site and voted too!

Congrats!
I'd just as soon not meet up with the Dagda, thank you very much.

Congrats, Aubrie. Popped on over and voted for you. Good luck!

Well done Aubrie! I'll give it a vote:)

Aubrie, congratulations on this publication! The story is amazing. I've never heard this myth before, and you had me hooked until the very end. I voted and hope you win!

Congratulations, Aubrey! I'll have to go check it out.

Congratulations!! I wil go check it out!

Hey Hey Aubrie, haven't heard from you for ages and have been meaning to drop by. Congratulations on being accepted at Moon Drenched Fables. I'll go across and vote now.

All the best for your story..:)

Congrats, Aubrie!! I still haven't gotten down my to-read pile far enough to begin your book -- but I can't wait. I always enjoy your writing!

Congrats, Aubrie! You are getting so many great stories out there. I'm off to check it out!

I used to play the flute and got to interview James Galway (and his wife) a year or so back. I keep meaning to put a clip on my web site. He was a lovely guy, although he did insist on m=being called Sir James. Well, he earned it.

Congratulations on your story! I'm heading over to vote for it!
Ann

Finally had a chance to read your story Aubrie - very evocative! Just voted :-)

Aubrie, wonderful story. You got my vote.