Gearing up for LOST

I've followed Lost for all six seasons, never missing an episode. This is one of the only series that has caught my attention for so long. (Besides Star Trek TNG) Not only has it entertained me, but it has also taught me a lot about writing. What makes Lost so good is the characters and their personal stories. The mysteries of the island provide a great backdrop to see how they react to their environment and each other.

He's tough and he's tortured people in war, but deep down he's all heart. His chief motivation is to see his long lost love, Nadia. This picture depicts the first time he sees her as a prisoner of war. 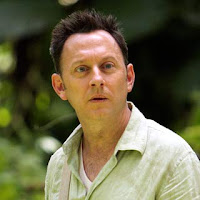 Probably one of the most complex characters, Ben Linus has a sad history of an alcoholic father and a sequestered life on the island. This season we finally get to see another side of him in the alternate reality, proving that if his circumstances were different, he'd be a better man. 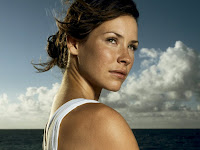 Usually I'm drawn to strong female characters,but in Lost, I don't like any of them. Kate is beautiful and strong, but she's also frustrating. Why can't she pick between Jack and Sawyer? It always seems that she wants what she can't have. Being a mother has softened her a little, but I still can't seem to like her.

Another strong female character that I don't like. She's too blunt and bland, and doesn't tell anyone the truth straight up. Very frustrating. I always felt like Sawyer liked her second best until she died.

For those Lost fans out there:
Who is your favorite character? Least favorite? and why?
What do you expect from this finale?
Posted by Aubrie at 9:25 AM

I'm a giant LOST fan too! I watched the pilot and have never missed an episode. This is one of the very best character-driven series ever made, and the gripping plot keeps me on the edge of my seat week after week. I can't wait for tonight's series finale, but I also can't wrap my brain around the fact that it's the last show. I'm sad it's ending.

My favorite character is definitely Sawyer. His tortured past breaks my heart, and his renegade style is totally believable for me. I also love his dialog and the "pet" names he comes up for people. Not to mention he's a hottie :)

I hated him with Juliette, probably because I, too, never connected with her as a character. She was too stiff, too stoic for me.

I love Kate, though. Kate looks exactly like I picture my ten-year-old daughter will look one day, so I have a bizarre attachment to her, LOL. I agree though, she's the weakest "tough-girl" heroine I've ever seen.

Usually, I TiVo LOST because hubby isn't a fan. I've warned him though, tonight I call dibs on the wide screen HD TV in the living room. I'm watching the finale episode in real time!

I gave up on LOST after 3 seasons. I just couldn't take investing an hour in a show and having the plot move backwards. LOL

*sighs* I sort of loved Charlie too though.

Oooh, Juliette was totes my least favourite too. I think she just wasn't acessible as a character.

Also, this is silly but, Jack sometimes (and only sometimes) annoys me when he does that OMG I'M THINKING I'll DO A SLIGHT WOBBLY HEAD THING. I don't know whether's its a deliberate feature or not but I really just want to hold his head still when he does that *cringes* That's quite weird though, right?

It's KILLING me that you guys get it today. NOBODY tell me what happens, but here's hoping it's a ggod one *thumbs up* *runs away with hands over ears*

I have to admit I'm a little lost with Lost. (Hee, hee.) But I think if I would have followed it from the beginning as you have, I would have LOVED it.

The only show I never miss? Chuck. Serious plot holes all the time, but I love the characters. :o)

Hope you're having a great weekend, Aubrie!!

Not really a LOST person but heard great things about it. Maybe I'll rent the dvds to see what the fuss is about.

I've watched every episode of Lost, too. I totally agree about Juliette - bland is the perfect word.

My favorite characters are probably Sawyer and Sayid. I also liked that step-brother and sister that died way back in the beginning, remember them? I kept hoping they'd come back.

You know I've never seen a single episode of Lost (but truly, I don't watch much television), but you make it seem like a thrill! That last actress I saw in the final Santa Claus movie with Tim Allen. She played sort of a tough character in that, too.

One of these days, I'll probably watch a show. Sounds like fun.

I only watched the first couple seasons of LOST, but I love Star Trek: TNG. I might have seen all the episodes multiple times.

If I had to name a favorite character from LOST it would be Sawyer.

I must admit, I haven't watched "Lost". While I love fantasy books and was a big fan of "Charmed", the show didn't appeal to me.

My friend loves it. In fact, she turned down an invite for dinner last night because of the finale.

So, was it a satisfying ending?

So what did you think of the ending? For me, there were tears but a WHOLE lotta resonance. Jack! Sigh.

So, after watching one episode, I could never really get into Lost. Sooooo many people like it though, so I'm thinking I'll have to give it another try...

So glad you said it, because I can't stand Kate. I haven't watched Lost for a few years since it switched to pay per view in the UK, but I certainly don't miss her!

Sawyer and Sayid. I agree about Kate. I watched the first few seasons, then sort of dropped out.

Having never seen an episode, are you saying I should invest some time and watch all the seasons on DVD? Perhaps that will be my goal for the summer.

I have so much catching up to do. Somehow we managed to miss Lost when it started, so I have to watch on DVD, and they never bring out the last series in time for me to watch the next... Aghghg!

I wanted to like Kate, I really did but she's so unlikeable. Bleh.

I liked Daniel Faraday and DESMOND!!!

I love the Scottish accent, brutha.

p.s.
You're comment format is perfect. the full page is wonderful!

I need to get on the Lost bandwagon! My brother is lending me Season 1 so I can get on it. I follow 24 the way you follow Lost :)

John Locke was my favorite character and I was super-impressed with his acting this season. He switched from the Man in Black to Good John Locke in the wheelchair effortlessly.

I also loved Hugo. Once Mikie and I played a Lost drinking game with an episode and every time Hurley said "Dude" we had to drink. We passed out after it was over. Ole Hugo did us in.

I have an award for you on my blog today m'dear :)