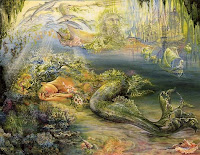 The deadline is coming up for Pill Hill's Atlantis Anthology! I checked on Duotrope and they only have 3 responses pending. So I'm thinking that maybe I have a good chance? At least it's not a hundred! (Like Beneath Ceaseless Skies and Clarkesworld) Does anyone want to write an Atlantis story and submit it as well?

I'm halfway through my story. It took me about a month to think of all the different ways an island can sink in the ocean and why. And then I had to think of which perspective to write the story from: Explorers finding the island underwater? Mermaids that live under the sea? I finally decided to write the story from the perspective of a girl living on the doomed island.

I thought I'd throw in Poseidon to make it more interesting!

Here is the blurb:
When Marina's brother sets sail during a storm, Marina makes a deal with Poseidon to save him: her hand in marriage for her brother's life. Left with a pearl ring, Marina must wait for Poseidon's return. While in the marketplace, she meets a young temple guard that assures her she is safe from his wraith. Tempted by his love, she kisses him and the sea rises up as Poseidon gets his revenge.

The surf churned bubbles in the sand and whale-sung elegies rode the wind. Marina peered through the seashell charms hanging in the window of her beach hut and watched her brother’s fishing boat disappear over the horizon, riding the tidal waves out to sea. He’d been reckless before, but this time he tempted the gods with foolish abandon. Emptiness rose in the pit of her stomach with the ill omens. She knew she’d never see him alive again.

What would you choose to write about if you were to write an Atlantis tale? What do you find interesting about the lost continent?
Posted by Aubrie at 10:23 AM

Wow--I'd say you have a great chance. Your story sounds so intriguing!! :)

Wonderful first paragraph! I can't wait to read it.

If I get a chance, I plan to write a story for the anthology, too. Mine is based on the dooming of Atlantis, but I'm taking off from Plato's account of Atlantis. The story he told was lost in the middle. I plan to read through it again and pick up from there on what it could say. My planned story is called "The Staff of Zeus."

I've always been fascinated by Atlantis. In sixth grade, I wrote a story that combined the Bermuda Triangle, Atlantis, and the Titanic. A few years back, I was going to create a novel with the same short story title about archaeologists finding the lost Plato account and finding the lost city. Plus, I play Age of Mythology (Extended version too), and in the campaigns, the main character is Arkantos, an Atlantian general. In the second campaign, it is about his son, Kastor after the destruction of Atlantis. It's a great computer game. I highly recommend it if you like mythology.

Both your stories sound good, Aubrie and Cherie. I don't have any ideas for it, so probably won't submit. Good luck, guys!

I love stories dealing with trying to save a sibling. Great intro!!

I don't know what I'd write, but maybe I should ask his son. He's discovered an obsession with Atlantis and just bought a Lego set.

Sounds great! Please, keep us updated on the progress. Hmm... I think I'd write about treasure hunters finding it. There'd be so many possibilities :)

So funny that you posted about this today - I just finished doing some heavy duty research for my story!

I don't know all the details yet, but I'm doing to base the story on the Minoan eruption and the tsunami that entombed the town of Akrotiri. What I find fascinating, unlike Pompeii, there were no human remains found. Pots and tools were just abandoned. I think I'll focus on someone who lives in the town, describe how they angered the gods (this is what I have to iron out yet, I'll leaning toward war with Athens), the destruction. Plus, I'll have to figure something out to explain why the lack of human remains. (I'm thinking the gods turned them into mermaids.)

Ok, typing this out, I basically do know the entire story. I'm gonna get started on it now!

Great beginning and sounds like it could shape up to a really fun story.

Never written about Atlantis directly, but the historical background of Flow (my contemporary novel) invokes it.

I wasn't all that drawn in by in the story, but for a cool concept, there's an alternate history novella by Harry Turtledove entitled "Aubudon in Atlantis" about ... well ... yeah ;-) ... where the title character is searching for a dodo.

Oooh I like it. I hadn't heard of this Atlantis Anthology.

Poseidon is mentioned in my current WIP and I was almost named Marina. (Swear it's true. Ask my mom.) So your story sounds that much better now. Hope you win.

Sounds like a great story. Let us know of the outcome.

Some other great ideas here.

Good luck to you all.

I don't have time at the moment to target a story for this, but if I did a mermaid story sounds interesting.

Thank you everyone for responding! Wow, reading through these comments has made me very happy!

Love the blurb and the excerpt! It has all the elements of a classic Greek tale but...hey, it's Atlantis :D

Totally random...how do you find these anthologies? Just search and see what comes up? What a cool chance to write some short fantasy.

I know you'll tell us if you make it in! Thanks for sharing the info.

Wow! That sounds like an incredible story. Definitely keep us updated on the progress.

As for your question, I wouldn't have a clue what to write about when it comes to Atlantis, but the legend always has intrigued me.