This weekend was all about flute! We had a wedding to play on Saturday morning at Castleton, (where my sister got married), a beautiful place in Windham NH for events and functions. It was 54 degrees! My flute felt like ice in my hands, so all of you out there wanting to get married in the morning in September in New Hampshire, you need to remember how cold it is and think of your poor musicians playing outside! (Nevermind the bridemaids dressed in short gowns...brrrrr)

Then, we rehearsed for three hours for our concert on Sunday at the Pleasant View Retirement Home. Pictures below: 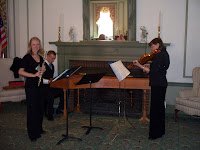 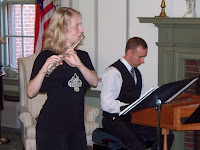 The concert went very well, and we even managed to put someone to sleep! I think it's a compliment because our music was so calming. I'll have video up later so you can listen and even see the audience member falling asleep in the back! The rest of them recognized Eine Kleine, Sheep May Safely Graze, and Pachelbel's Canon. They had trouble recognizing the Air by Bach though. Maybe we'll pick something else for next time.

I also finished the third round of re writes for Nebula's Music. I've never reworked anything in this capacity and depth before. Lyrical Press really pushes their authors to turn out their best and that's awesome. I can't wait to see the finished product.

What did everyone else do this weekend???
Posted by Aubrie at 9:35 PM

Wow! It does sound like you had a busy weekend! On Friday night, I went to a football game to see my cousin in the marching band. She had a solo on clarinet. On Saturday, I went with a friend shopping, although we didn't buy much. On Sunday, I did nothing pretty much. *laughs*

You'll have to let us know when they finally release Nebula's Music. I hope it does really well, so you'll write the second one!

Thanks Cherie! Football games are fun! I used to play piccolo with the marching band. (Schreech!)

It's nice of you to support your cousin.

I always go shopping and don't buy much! Looking is half of the fun.