Nina Croft on Writing and a Giveaway of Breakout! 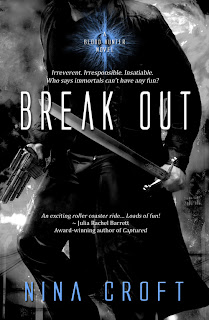 Today, I was going to blog about my writing procedures. Then I realized I don’t actually have any. I’m going to admit up front—I am not an organized person, and there is not a lot of method going into my writing.
I tried asking my husband what he thought my writing habits were. His reply was ‘fits and starts’ and ‘mood dependant’. Which is a little scary, and I guess means that I’m not exactly consistent.
But one thing I do know is that I’m a plotter. Probably because I’m so unorganized that if I didn’t plot, I’d never finish anything.
I never wanted to be a plotter. In fact, I always wanted to be a pantser. One of those people who just sit down and start writing and absolutely wonderful stories just trip from their fingertips, fully formed, and full of depth, and theme, and fantastically sympathetic characters
But I’m not.
I probably started out doing a hybrid of the two, a bit of plotting, then a bit of pantsing. I’d usually begin with some characters and a starting incident, and I’d know where I wanted to end up (I write romance so the happy ever after is a given). In between, I’d move toward the conclusion, sometimes with purpose, sometimes weaving around as though I’d drunk way too much red wine (which might actually have been the case), but I’d get there in the end.
Then I read Stephen King’s, On Writing – A Memoir of the Craft, one of my favourite ‘how to write’ books. And here’s a quote from it:
“Plot is, I think, the good writer’s last resort and the dullard’s first choice. The story that results is apt to feel artificial and labored.”
And I thought—I don’t want to be a dullard. Let’s go for this. I had a couple of characters, and I knew they had to fall in love, but other than that, I had no clue. I started writing, and soon found myself stuck in the middle, unable to see how to get to the end without totally rewriting what I had done so far. Which I did. Numerous times.
So for my next story (which was actually Break Out, book 1 in my Blood Hunter series), I decided to embrace my dullardness. And I plotted. Not just the beginning and the end, but the middle as well. I did character interviews, and a scene by scene breakdown of the whole book. And I loved it. Not only that, but I enjoyed writing the first draft as well—it just whizzed out of my fingertips. I found I could concentrate on the characters reactions and emotions during the scenes rather than on what they were actually doing and why.
So now, I like to think I do my pantsing during the plotting process. That’s the time when let my imagination run free and let the disorganized chaos that is my mind spend every waking moment asking—what if? I’ll plot and plot (but all sorts of different methods and never the same way twice) and then at some point, my characters will come alive and start chatting away in my head. Then I can start writing. And I like to write really fast first drafts.
And then I have to edit. But we won’t go into that right now.
So are you organized or disorganized? Let me know for a chance to win an ecopy of Break Out. (All comments will also be entered into a draw at the end of October—details on my site.)

Break Out – Blurb
The year is 3048, Earth is no longer habitable, and man has fled to the stars where they’ve discovered the secret of immortality—Meridian. Unfortunately, the radioactive mineral is exorbitantly expensive and only available to a select few. A new class comprised of the super rich and immortal soon evolves. The Collective, as they’re called, rule the universe.
Two-thousand-year-old Ricardo Sanchez, vampire and rogue pilot of the space cruiser, El Cazador, can’t resist two things: gorgeous women and impossible jobs. When beautiful Skylar Rossaria approaches him to break a prisoner out of the Collective’s maximum security prison on Trakis One, Rico jumps at the chance. Being hunted by the Collective has never been so dangerous–or so fun!
Buy Links
Amazon
Barnes and Noble 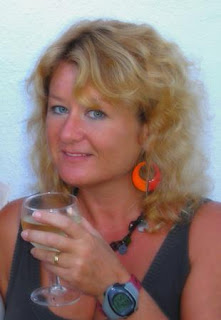 Bio:
Nina Croft grew up in the north of England. After training as an accountant, she spent four years working as a volunteer in Zambia, which left her with a love of the sun and a dislike of 9-5 work. She then spent a number of years mixing travel (whenever possible) with work (whenever necessary) but has now settled down to a life of writing and picking almonds on a remote farm in the mountains of southern Spain.
Nina writes all types of romance often mixed with elements of the paranormal and science fiction.

One lucky commenter will win an ebook copy of Breakout! Please leave your email in the comments section of this post to enter!
Posted by Aubrie at 5:30 AM

YAY on your book Nina!!!

I'm an organized writer too. I need to plot and have some direction although things usually change a bit as I write. But at least I start out with a definite plan. LOL

I go both ways. Ha. I think there are times when I'm not sure of my direction so I'll read back over the previous chapter and the synopsis. But most of the time it's a process of whenever I have time and feel up to writing. So, no, I don't think I've got much organization going on over here. ;)

I have always envied people who could plot. I can't. I have to just let it happen. I've usually worked it all out in my head before I finally start writing it down, but even then, the story will suddenly wander off in a different direction. If Stephen King is right, why aren't I a best-seller?

Congrats on your book, Nina!

I'm a plotter. I do my "pantsing" in my head when I envision scenes and let my characters do whatever they want. Then after some time, I'll sit down and write down the outline, etc. After that, I'm ready to just dive in and write. :)

Thanks for having me Aubrie!

And good to know there's a lot of variety in us writers!

Jennifer - I always change things as well - especially the ending though not the HEA!

You're versatile, Chelle - that's got to be good!

One day you'll be a best-seller, I'm sure Jenny!

Cherie - you sound closest to my method so far!

Oh Nina i'm actually jealous LOL I would love to be a plotter. I'm kinda a bit of both really i suppose, plotting and pantsing my way through a story. And yet i'm an organized puppy around the home, so go figure.

I like the sounds of the story. We are ruining our lovely earth.
debby236 at gmail dot com

The winner of Breakout is Jenny Twist!!!