Promo and excerpt: The Chosen by Sheenah Freitas

It was as if she was watching herself, or perhaps she was a ghost watching a person who looked like her. Though Kaia was here—wherever here was—she was also there, on the familiar dirt path. There, she now realized, was home. The Kaia that was home was walking along the same dirt path that she last walked on when she was on Earth. Basket in hand, her pale violet dress blew gently in the wind. The sunny apron that she wore over her simplistic dress matched the fresh dandelions growing near her. The day was perfect, the animals content; nothing, it seemed, would go wrong. But Kaia knew differently when she heard the soft tune emitting from her other self.

Kaia watched as she continued walking down the same old path that led to the same old berry patch. That’s when she noticed it again. That shadow. Last time, whatever flitted by had piqued her curiosity, but she merely brushed it off. This time, her curiosity was aroused even more. She had to know what it was. Instead of following herself, she followed the shadow. Seeing it from above made her realize that the shadow wasn’t an animal. It was moving slower than one, yet faster than anyone else she knew.

The shadows of the trees made it hard to see the person’s face. She squinted, but it didn’t help. Finally, a spotlight of sun illuminated the face. She found herself looking at Reeze. But what was he doing here? He never acknowledged her when he passed. Was he always sneaking around in the village?

She floated down from her vantage point. She wanted answers and she was going to demand them from him. Suddenly, she stopped, hesitating. If she were reliving the past, would Reeze know her?

Shaking her doubts from her head, Kaia carefully took her hand started to touch his shoulder. As her hand came into contact with his shoulder, it fazed right through him. Though she was surprised, she understood. The past was already written, and there was nothing you could do alter it.

A sudden thought crept its way into her head. Maybe she was a ghost. All of the activities she had done on Zinc would then be nonexistent. Was Zinc the place where the sinful children of God were sent? It was a rightful punishment to thrust someone into a different place and tell him or her they had the heavy burden of saving this strange place, but what sin had she committed?

On the other hand, Zinc was what Earth used to be: full of life and vitality. There was little crime, and so much good about the place. Perhaps Zinc was a place where God’s favorite children were sent. But why the heavy burden? Why not reunite her with her parents?

Fighting her inner thoughts, she heard a sound. It was faint, far-off. She knew it was somebody’s voice. For a fleeting second she thought it was Tipton, but she shook it off. He was an assassin and from their brief encounter she knew he would be discreet. There was an old folk tale a few of the villagers would tell about the whispers of the trees. Could this faint voice be the trees talking to her? To warn her of something? She shook her head again, clearing her thoughts. She definitely heard that voice from somewhere. But where?

What was she doing here? She knew this place, that faint far-off voice. Kaia just couldn’t bring herself to remember. Home. She wanted to be home. But her home was dead. She was astonished to find a tear trailing down her smooth face. Slowly and carefully, as if it would disappear at any second, she touched it. It was real. Could the dead still cry? 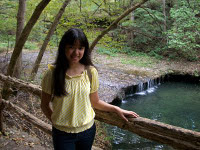 A geek at heart, Sheenah Freitas has a love for the whimsical and magical. She looks to animated Disney movies and Studio Ghibli films for inspiration because of the innovative twists on fairytales, strong story structures and character studies. When not writing, you might find her in a forest where she’s yet to find any enchanted castles.

This excerpt is brought to you by Bewitching Book Tours: 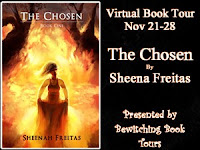 Thanks so much for taking part in my tour. :)